Previously on Legends of Tomorrow, ‘Left Behind’

This week’s outing wasn’t as exciting as last week’s, and the plot line is something of a time-travel staple. Still, the charm of the cast and the developments at the end of the episode make it worthwhile. 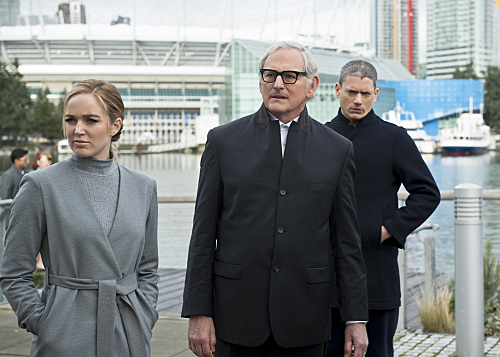 If you’re going to tackle time travel, you almost have to explore how far you’d go to secure a better future or change a tragic past. Would you go back in time and kill a powerless Hitler as a child? Could you be a murderer if it meant saving millions of lives? The Legends are faced with this dilemma when they arrive in 2147 at the Kasnia Conglomerate, a corporation-controlled society set to be the jump off point for Savage’s rise to power. If the team can figure out how he does it now (then) when he’s not as powerful and shut it down, there’s no need to get all murderous with him later when he’s at full power.

The major Conglomerate shareholder, Tor Degaton, has a 14-year-old son, Per Degaton, who just happens to be a pupil of Savage’s. When the Kasnia Conglomerate goes to hell in five years time after Tor Degaton’s death, Savage will betray Per, kill him, and seize control.

So, what do they do? Kill Per Degaton to ensure that doesn’t happen? Snart’s down with that. Everyone else? Not so much. As an alternate/backup plan, Ray decides to work on disabling the Conglomerate’s militarized tech that was born from his Atom suit technology; while the others decide kidnapping the boy is the lesser evil.

Once they have him, Gideon reveals it has changed nothing in the timeline. Rip takes it upon himself to bear the burden of killing Per Degaton, but can’t go through with it in the end, even though it would mean his son would live.

Tor Degaton brushes off Savage’s advice to risk Per’s life in order to be rid of the Legends once and for all. The man just wants his son back. However, this act allows Savage to plant seeds in Per’s mind that his father is weak and needs to be usurped. Per murders his father, and gives Savage control of his majority Conglomerate shares. Instead of stopping Savage’s rise to power, the Legends have accelerated it up. 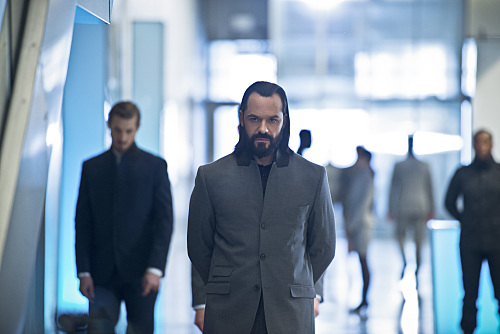 There were two subplots this week, and one fell flat for me. Ray spends the episode believing one of his descendants is responsible for the future Palmer tech helping control a police state. This means he left a love child somewhere in 2016 and it makes him feel like the deadest of deadbeats. False alarm, Ray! It’s your brother’s great-great-great-great-something or other. While he’s dealing with that, Kendra is having flashes of her life with Carter and their son in the ’40s. It makes her feel like she’s cheating on Carter with Ray.

Thankfully, by episode’s end they put this to bed and Kendra – once again – reaffirms her commitment to Ray. So, I’m gonna need at least three episodes with these two just being an in love, badass couple, kicking ass in different centuries and having amazing superhero sex at night. Full stop. I like them together and want to see it flourish as much as possible before Carter returns. 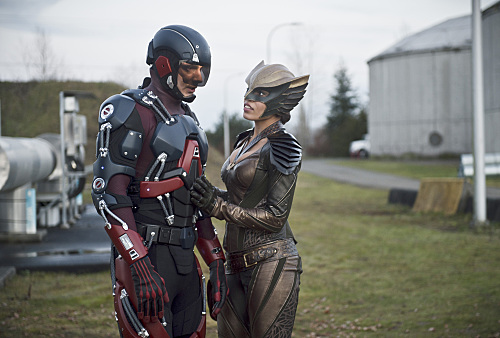 Mick Rory’s rehabilitation promises to shake things up. After a few heart-to-hearts with Rip and Sara, Mick makes a deal with Snart: They’ll just beat the shit out of each other and the loser dies. The winner lives, and if it’s Mick, he gets to jet off in the jump ship to parts unknown. Of course, Mick doesn’t go through with killing his bestie when he has the chance – just like Snart couldn’t kill him. Though he claims they’re all dead anyway once the The Hunters – sent by the Time Masters – catch up to them. They’ll kill Rory for not following orders, and they’ll kill everyone else on general principle.

I’m going to forgive Kronos calling bygones after a punching session (oh, boys) because The Hunters look serious AF and I’m here for it. What I’m not here for? This team failing missions and making things 280313 times worse.