Previously on Legends of Tomorrow, ‘Sail-Face’

This episode was… weird. I liked some of it – most of it, in fact – but it just felt like it was killing time until something more interesting could happen. I never felt like anyone was in any real danger, and Deathstroke Jr. was more of a joke than a believable threat.

The team is stuck in Star City in the year 2046. The city is a hot-ass mess, taken over by gangs who like to start random street fires. Running into the Green Arrow brings little comfort because he’s not Oliver Queen, but a black guy who doesn’t recognize any of them. 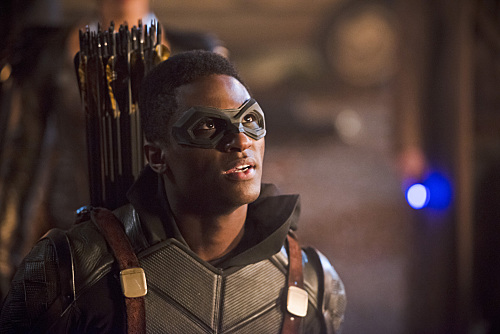 Back on the ship, Rip explains that this reality isn’t set in stone. He strongly recommends fixing their ship, continuing with their Savage mission, so everyone can go back to 2016 and make sure that whatever the hell ruined Star City doesn’t happen. They discover they need some tech from Smoak Technologies to fix the Waverider, and Sara insists on going with Rip, Cold, and Mick.

This is where things get weird.

Aboard the ship, Stein learns that Jax has a crush on Kendra.

I know, right? Since when? When has he had the time?

Jax is annoyed because Kendra and Ray seem to be getting along well. Stein calls himself helping when he advises Jax to go for it with confidence, but also tells Ray that he noticed a spark between him and Kendra, however, he doesn’t think it’s a good idea to get involved with a fellow legend. This backfires as it causes Ray to look at Kendra in a romantic way when he hadn’t previously. Thankfully, though Kendra liked it when Rays asks her out, she shoots him down because she’s still trying to get used to the very drastic changes in her life. Jax knows this means he doesn’t stand a chance either.

Sara runs into the Green Arrow, Connor Hawke, again and he tells her Oliver Queen is dead. He hasn’t been seen since The Uprising fifteen years ago. Who’s responsible for this rampaging of Star City? Slade Wilson’s son, Grant.

Mick gains control of a merry band of pillagers and decides he wants to stay in this post-apocalyptic future. There’s women, booze, minions to follow him, and lots of violence. His kind of everything. It takes some super tough love from Cold, who knocks his friend out and locks him aboard the ship. When Mick comes to, Cold explains there’s a reason he’s the brains – if Mick has one, he doesn’t use it. Mick gets on the same page as his partner, but makes it clear that’s the last time Cold is to lay hands on him.

All of Felicity’s projects are now stored in the old Arrow cave, which has seen better days. And so has Oliver, who’s not dead after all. He’s missing an arm, and lurking around the abandoned lair looking like Brett Favre with dryer lint on his chin passing as a beard. He reveals to the group that Connor is actually John Diggle, Jr. and he’s not so happy with Oliver for disappearing after everyone left and died due to the Uprising. Apparently, even in 2046, Oliver is still a mopey son-of-a-bitch.

Differences are put aside when Connor is taken by Wilson. Even though Rip is very clear that this future doesn’t have to happen if they go back to 2016 (meaning that Sara and Ray will be in Star City during the 2031 uprising and will help prevent it from happening), Sara and the team want to stay and rescue Connor.

Fighting ensues, Oliver stops being Mr. Get Off My Lawn, and the day that really wasn’t going to be is saved. Because this wasn’t a fixed point, it made little sense that Sara would want to stay and help fight Grant Wilson. In fact, getting the Waverider up and running without delay so they could get back to the real mission and return to 2016 that much faster was the smart thing to do. Still, it did provide an opportunity to explore Mick’s motivations for being in the group. Cold refers to the team as their friends, but Mick isn’t quite there yet. We haven’t seen this partnership under stress, and I’m looking forward to how this will play out. I think Brandon Routh and Ciara Renee together would be hot as hell, but I’m glad the show seems to be tabling any romances for now.

We didn’t get any information on when and where the Legends are going next, but next week’s episode looks like it’s going to be great.