Previously on Legends of Tomorrow, ‘‘Marooned’

I have to be honest: I didn’t think Legends of Tomorrow was capable of an episode like this. I’d joked that they wouldn’t be able to take Jax back in time to a point further 1965, tops. And if they did, I didn’t think they’d be brave enough to acknowledge the fact that a large portion of history wasn’t so kind to people of color, women, and homosexuals. I’m happy to say I was wrong.

The Legends head to Oregon in 1958 in search of Vandal Savage. Almost immediately they connect Savage to a string of murders and disappearances, and decide to go undercover to figure out why Savage turned into a serial killer. Since they’ve jumped back in time, he shouldn’t be aware of who they are.

Jax connects with a local teenager whose boyfriend went missing. A young black man sitting with a white girl in the local malt shop goes over about as well as you’d expect in the 1950s. While the show never went so far as to use the ugliest of offensive language used towards African-Americans (I think the worst we got was a “boy”), the interactions between Jax, Kendra, and the local white folks were both aggressive and disturbing enough to make the viewer feel uncomfortable, and it never did so in a way that made light of racism. 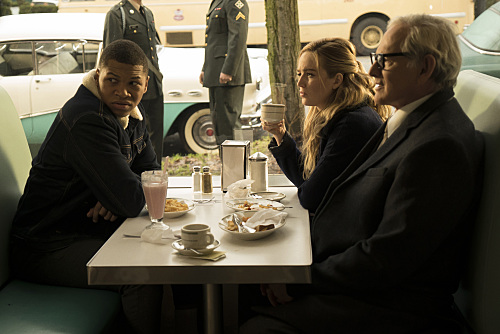 Sara’s encounters remind us that racism wasn’t the only form of blatant oppression back then. She and Stein go undercover in the mental hospital where Vandal works, and Sara becomes close to a nurse who fights off the sexual advances of male doctors all while hiding her homosexuality.

Kendra and Ray pose as young newlyweds and are surprised to find Vandal and his wife are their neighbors. Since Vandal can’t kill Kendra until her powers have emerged, she doesn’t let on that they have, and that buys her and Ray time to spy on Vandal.

In the end, they learn Vandal has been creating hawk-creatures using the residue from a meteor like the one which gave Kendra her powers thousands of years ago, and this is all taking place in the basement of the metal hospital. Unfortunately, this is discovered after Jax has already been captured and transformed.

Once Vandal is defeated, the team makes the decision to bring Jax aboard the Wave Rider to cure him (they do) instead of leaving him behind. This eventually leads to Jax, and the others, coming to terms with Cold killing his best friend in order to save the team. Everyone is now so okay with it, it makes me wonder if Cold actually went through with it.

While Kendra, Ray, and Sara are making their way back to the ship, that raggedy-ass Kronos appears aboard the Wave Rider. The rest of the team attempts to make it to the jump ship to escape, but the Wave Rider takes off, leaving the other three behind.

This episode got so many things right. When Sara gets close to the nurse, Stein questions whether it’s a good idea to encourage a gay relationship in a time when Sara knows it will be hard for her after she’s gone. Sara views herself a liberator, but is surprised to find that she actually begins to care for the woman, and that frightens her. Also, Ray gets himself checked for treating Kendra like a delicate flower who can’t handle herself in the field simply because they’re now a couple. That’s not an attractive quality to see in Ray, but it does seem like the kind of misguided chivalry well-meaning Ray would display. So, it was nice to see Kendra actually handle herself when she finally confronts Savage – if only the writers had left it at that and not have her requiring saving at the very end. But I get it: Kendra simply isn’t ready to take on Savage alone.

Each week, the show manages to put the Legends in roles and smaller teams that allows the actors to really shine. Wentworth and Arthur seemed to be having way too much fun as ’50s federal agents, and Cierra Renee looked like a Hollywood film star. The effects on the hawk-creatures were well-done, even though sometimes I felt like I was watching West Side Story with flying monkeys.

I’m happy the show has been renewed for a second season. It’s been a lot better than I thought it would be and it still improves every week.

2 Comments on Legends of Tomorrow – S1E8 – Night of the Hawk