Previously on Legends of Tomorrow, ‘Night of the Hawk’

This review will contain spoilers for the latest episode of Legends of Tomorrow, ‘Left Behind.’ 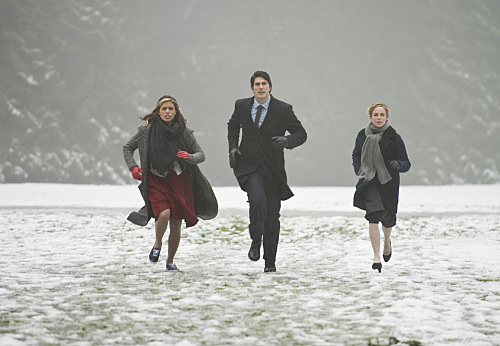 This was, hands down, the best episode of the season so far. It had everything: action, surprises, callbacks to the series from which it spun off, some feels, and the show’s signature badass fight sequences. Perhaps best of all, though, is that this episode leaves the relationships between the Legends in very different places than they were when the series premiered. Anything can happen next.

Once the Waverider takes off, Kronos (armed with better Time Masters tech than he had previously) makes off with Snart, leaving Rip, Jax, and Stein to fall through time.

On the ground (and in 1958), the trio of Kendra, Sara, and Ray quickly realize that their friends aren’t coming back. Not only can they not stay at the field to wait, they can’t stay in the Oregon town since their cover is blown and Vandal Savage is nearby. This leads them to Hub City where Ray begins work on a time beacon to signal the Waverider with their new location. It eventually works, but two years have passed and Sara has moved on, rejoining The League of Assassins.

Their homecoming affects Kendra and Ray in very different ways. She’s happy to be back in their world of time travel, Netflix, and less overt racism. He’s hurt by how quickly and eagerly she sheds the life they built together. However, there isn’t much time for couples counseling as they head to Nanda Parbat to “rescue” Sara. I can’t remember the last time Sara needed saving.

She has not only reaffirmed her commitment to the League and Ra’s al Ghul, she’s impressed him with how quickly she has mastered their ways. The rescue attempt quickly goes wrong when Sara turns her friends over to the League. It takes a trial by combat between Kendra and Sara to snap Sara back to sense. 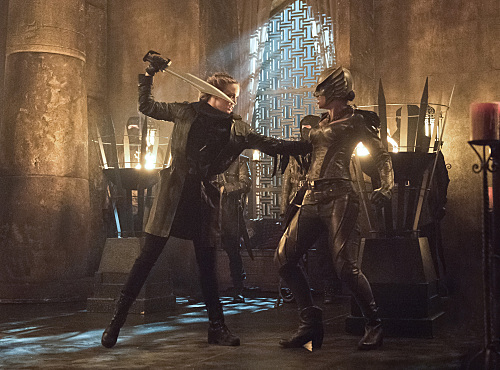 Once reunited, the Legends quickly question why Kronos took Snart instead of killing him. Cut to Kronos stomping into the part of the ship where he has Snart cuffed to a railing. I still didn’t get it. In fact, at this exact moment I thought, “Have we seen Kronos’ face before? I wonder if we’ll see it now. Oooh! Maybe he’s a cyborg.”

I was nowhere close to thinking the truth.

If you listen to any of our podcasts you’ve no doubt heard us talk about how a great plot twist is not just one you didn’t see coming, but one that makes you exclaim, “Of course!” when it does. That’s because it makes sense and doesn’t feel like a twist for the sake of one. When it comes it should explain everything, even questions you didn’t know you had. Of course, Kronos is Mick. That explains how Kronos would show up (almost comically) at the end of damn near every episode, always knowing where they were. He was Kronos and had already lived through this. Mick hadn’t yet become Kronos because Snart had yet to leave him to go mad in an isolated (and undisclosed) location. The Time Masters hadn’t yet found him, trained him, and sent him after his former friends.

Mick is as butthurt as you’d expect him to be. He blames Snart. He threatens to travel through time and kill Snart’s sister, Lisa, multiple times (I thought they were a couple?). Mick is fucking crazy. His mistake, though, is leaving Snart aboard the ship while he drops down on Nanda Parbat to take care of the rest of the Legends. If there’s one thing he should know is that the team is much better together than they are apart. After he’s defeated and his true identity is revealed, the group (some more reluctantly than others) decides to keep him locked up with hopes of rehabilitating him.

UPDATE: A previous version of this review stated Wentworth Miller battled addiction. It should have read “depression” and has since been corrected below.

Solid episode. It was great seeing the terrifying (but oddly humorous) Ra’s al Ghul, the Kronos reveal was awesome, and Snart’s act of sacrifice to escape and help his friends was another moment I didn’t see coming. I am glad Ray and Kendra worked through their problems because this is the relationship I didn’t even know I wanted on this show. Wonder how long he’ll keep the engagement ring a secret.

Speaking of that, I love how Kendra living in the late ’50s led to her literally losing her wings. Sure, it’s a bit on the nose, but that time was highly oppressive for women (especially women of color), and I like that she acknowledged losing herself trying to conform.

I’m curious to see if Mick can be redeemed and how much Sara will have to do with it since she has spent the past two years being an assassin again. Also, the dynamic between the group should be interesting now that Ray and Kendra have spent so much more time together than everyone else. Plus, it will make it that more believable that she’ll be conflicted when Carter returns. Cause you know he’s returning.

One last thing: I know he’ll probably never read this, but Wentworth Miller should know how wonderful he is. This past week he shared an intimate story about battling depression and suicidal thoughts. It’s easy for people to forget that celebrities are humans like “regular” folks and they’re not immune to depression. And even though I am closely aware of how it works, I catch myself thinking “Didn’t they know how much they were loved?” when a celebrity commits suicide. I don’t know if this will ever help, but I sure hope Wentworth Miller knows what a light he is and that the world needs that light.