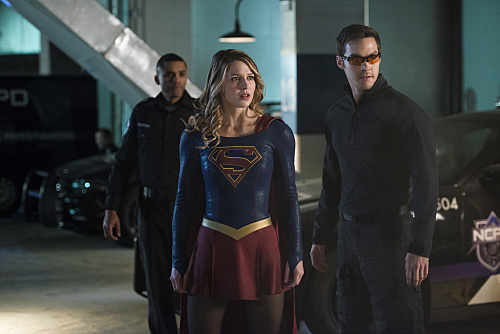 Why Do You Get To Decide

There’s a good argument to be made that Superman inspired most of the superheroes on Earth. Kara is definitely inspired by her super cousin and now she has inspired heroes for better or worse.

After Mon-El passes Superhero Kindergarten to Kara’s satisfaction, he is ready to go into the field. It’s right on time as Supergirl’s nemesis, the recently escaped Livewire, appears to be attacking the National City Police Station. Once Supergirl and Mon-El arrive, Kara tells Mon-El to protect the cops while she deals with two goons that have the same abilities as Livewire. While Supergirl is getting #DatWork from the two Livewire knockoffs, Mon-El decides to disobey Supergirl’s order and attempt to help her. Guardian gets there on a badass motorcycle and attempts to protect the cops, but a stray lightning bolt that Mon-El deflects knocks out Guardian and a cop. When Supergirl goes to check on Guardian she takes his helmet off to reveal his identity as James!

If You Don’t Stop I’ll Stop You

This has to be one of my favorite scenes of the season, where Supergirl is allowed to read James the riot act for risking his life. Even though she may have gone a bit too overboard with scolding him, I am with her main point that if he keeps this up, he can be killed easily since he isn’t super-powered. Come to think of it, in a world that has protectors such as Supergirl, Superman, Martian Manhunter, Miss Martian, as well as Mon-El, even though he is in training, who needs a vigilante with a shield? To James’ credit, he stands his ground and tells her he’s going to continue doing what he was meant to do.

He gets his chance when Winn finds out where Livewire is; Guardian races there only to be ambushed by the Livewire clones. Since Mon-El overheard Winn and James’ conversation about the location of Livewire, he arrived to help, only to be caught by the mad scientist. (Yeah, that’s what they’re calling him.) Luckily for them, Supergirl arrives to save them both from becoming Livewire clones. Supergirl does allow Livewire to escape to prevent her from killing the mad scientist. The day is won and J’onn gives Winn and Guardian the seal of approval that they make an effective team. Supergirl won’t actively try to stop them, but still won’t support them as vigilantes. 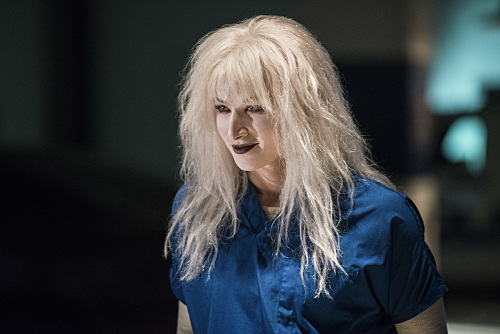 Let Her Drown In Her Own Sins

Remember M’Gann? Well, she is still locked away at the DEO in containment cell 19. She’s taking her imprisonment solely because she’s a white martian like a champ when she appears to be attacked by an assailant attacking her mind. If you didn’t know, M’Gann is no slouch and she shatters her cell by letting out a powerful scream before she faints. J’onn takes her to the med bay where Alex tells him that to try and save her he should use the martian bond where they meld minds. J’onn is not down with this plan at all and is willing to let her die because her people killed his kind. What kind of hero would J’onn be if he let her die? This isn’t how M’Gann dies because he does the mind meld. Once he saves M’Gann she lets him know that she was battling white martians attacking her mind to locate her and they know where she is and they are coming.

I like the flaws they are able to show with J’onn and his prejudice for white martians and taking that out on M’Gann – even though it has been hard to watch the last couple of times they interacted. It’s a good thing he is able to trust her now because when those White Martians arrive, J’onn will need all the help he can get. 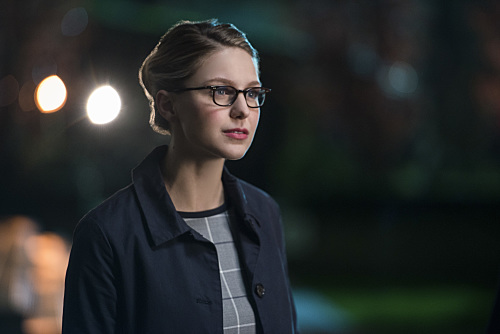 I am in 100% in agreement with Supergirl and her stance on non-powered superheroes. It would have been nice to see Kara voice her feelings when she was on Earth-1 helping The Flash fight aliens with a couple of guys with bow and arrows and one dude with a freaking handgun.  Especially when one of the bow and arrow guys ( the one with the abs) told her to sit this battle out because of his feelings.

I hope we never see those goons who kidnapped Livewire or that Mad Scientist again. The makeup for those two Livewire clones was horrible. When they were on screen with their powers it completely took me out of the episode because of how bad they looked.

Alex and Maggie were fun together as they have been most of the season. Does Kara know that Maggie knows she’s Supergirl?

Look, if you’re this far into the series you’re going to have to accept some of the cringeworthy dialogue Kara is fed. Does up, up and away ring a bell? However, the writers have to do better than Kara asking Mon-El do you like me. She’s a grown woman, not a fifth grader. Mon-El wasn’t much better in that scene talking about her eyes are like blue comets. I am pleased that Kara didn’t immediately fall for him and still wants to keep it as professional as possible with the two of them being partners. Speaking of people that Kara didn’t fall for, with their history, I’m super interested to see how the Guardian conflict plays out between Kara and James.

"We Can Be Heroes"