Okay ProFans, before we get started I need to throw a couple of disclaimers out here. As I’ve said before Raven is one of my favorite characters so a Raven-centric episode is a win. Also, when characters get read like a book for all their choices, whether they be stupid, selfish, ill advised, pathetic, or otherwise it is like music to my ears. Then you come back and tell me that Raven is the key to defeating the main villain! It’s like watching the season one finale of The Flash meeting the cast of LOST and getting my first BMX bike for my birthday all wrapped into one awesome day!

We pick up right where we left off last week with Clarke, Jasper, and an unconscious Raven on their way to meet with the rest of the insurgency. Jasper wastes little time reminding Clarke that he doesn’t forgive her for killing Maya as well as all the other innocents that died at Mount Weather. Octavia is still not forgiving Bellamy for saving their lives, because she knows he only did it to save her and that he still believes in Pike’s madness.

There’s a saying that goes something to the effect of keep your mouth shut and be thought of as a fool rather than open your mouth and remove all doubt. My jaw dropped when Bellamy doubled down and was like, “The Grounders were starving us out. The Grounders could have attacked us at any time.” C’mon, Bellamy. You don’t have to front for Pike anymore. Smarten up.

By the time Jasper arrives they realize they need one of the original 100 wristbands to try and remove ALIE from Raven. Clarke remembers Niylah having a wristband so they go to her place. Once Bellamy damn near puts a gun to Niylah’s head to let them in, they restrain Raven to wait until Monty and Octavia come back with an EMP.

This is where the fun begins.

After ALIE tells Raven to dislocate her shoulder to try and break free of the restraints (good thing there is no pain in the City of Light) the team decides to take turns watching her. If for some reason you’re reading this review and haven’t watched these scenes multiple times, go do yourself that favor and watch Raven go in on Clarke, Jasper, and Bellamy. All I wanted to do was just stop and applaud stand up and yell, “Bravo” and “Encore” to Ms. Lindsey Morgan after every interaction. I’m still waiting for Kane, Pike, Abby, Indra, and even bring Lexa back for “Real Talk with Raven,” but alas the show must go on.

Once they get the wristband on Raven and finally get it to work, Clarke cuts the back of Raven’s neck to allow the remains of the ALIE chip to be removed. Raven comes back to consciousness. The team gets into the rover to flee since ALIE knew where they were when Niylah slapped Bellamy, Raven tells them the reason ALIE wants ALIE 2.0 is because it’s the only thing that can stop her. So they all jump into the Rover and peace out.

We do get a flash to the City of Light where we see other people inhabiting it. Jaha tries to tell ALIE they will find them, but ALIE already knows what must be done: They must be killed, because with Raven’s abilities and what she has seen, Raven will figure out how to stop her. 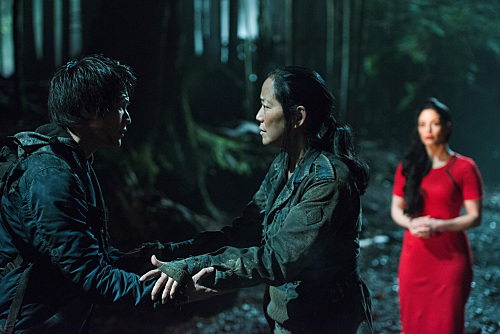 When Octavia and Monty break away to go to the drop ship to grab the EMP, Monty is confronted by his mother Hannah, who is under the control of ALIE. Monty was smart enough to ask the painful questions that someone under ALIE’s control wouldn’t remember, but that just led to Hannah going Mike Tyson on Monty. Octavia arrives to help, but Hannah gets Octavia’s blade and almost makes Octavia twins with the Headless Horseman. Monty shoots Hannah dead.

I cannot pretend to understand the feeling Monty went through by killing his mother. This isn’t a situation where she is a zombie and there’s no coming back from that, or some clone that isn’t the real Hannah. She was under a spell that she probably could have come back from, and Monty killed her ensuring that she wouldn’t. Now that he sees with his own eyes someone can come back from it by watching Raven, I am interested to see how he will deal with that moving forward. I hope he doesn’t become Jasper 2.0 . 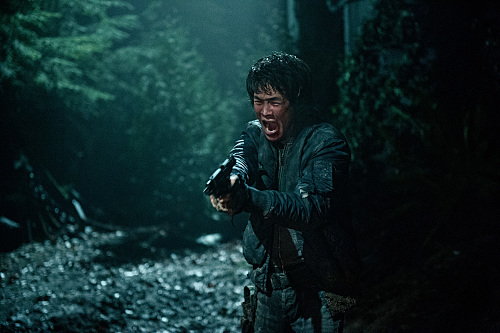 This episode could have also been titled “ Under the Shade Tree” the way not only Raven, but Jasper got to throw plenty of shade pointed directly at Clarke. Octavia got to let Bellamy know how she felt. Niylah got a jab in at Clarke at the end. Jasper still had a few words for Bellamy, also. Speaking of Bellamy, what is he doing at this point? If he isn’t down for the cause and Octavia doesn’t want anything to do with him, what is his purpose? Hopefully, he figures it out and with all this truth out on the table I’m hoping they can all move past any further bickering and get to the point of stopping ALIE, who is definitely a formidable villain. Am I reading too much into this or is Jaha not 100% with the idea of killing Raven and the others? His look when ALIE said she has to kill them did not seem like a look of agreement.