Previously on The 100, “Nevermore” 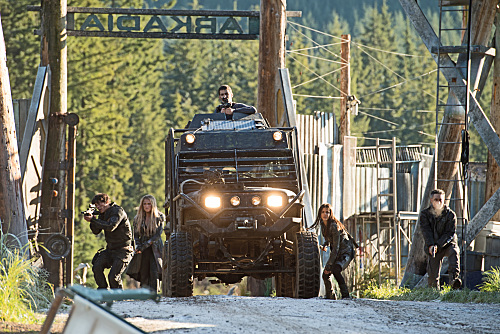 Only To Give You What You Need

While walking through Polis with Ontari, Murphy sees Emori at a merchant stand posed as a rat cook. Murphy gives directions to Emori to meet him at the flame keeper’s lair. Once they arrive Emori is amazed at the info in the room. Murphy of course thinks she stole it for the flame keeper, but since we know Alie is in control she was probably intrigued by how Becca is perceived by the Grounders – also, the information she could gather since this is her history and her creators future for the ALIE program.

After making out and making love Murphy brings Emori up to speed on how he got into his current situation, how and why he is so close to the new Commander, and how she technically isn’t Commander. He also tells her that he doesn’t know how to perform the ritual to make her Commander. Murphy asks Emori to stay as he is called back to Ontari’s side and as Murphy and Ontari are hearing concerns from the people of Polis, a hooded stranger appears and its none other than Jaha! That man can make an entrance!

Jaha immediately gets Ontari’s attention by telling her she doesn’t have to be a false commander. Then Jaha hangs Murphy out to dry by telling Ontari he can’t give her what she wants and the reason he knows this is because Murphy told him. Murphy kinda did tell him because he told Emori, who had been chipped. Ontari has Murphy arrested and Jaha persuades Ontari to take the key. Emori later returns to report that the gates of Polis have been opened and with Jaha and Ontari by her side, Alie appears sitting in the commander’s chair like the Queen Bee ready to continue to fill the City of Light. 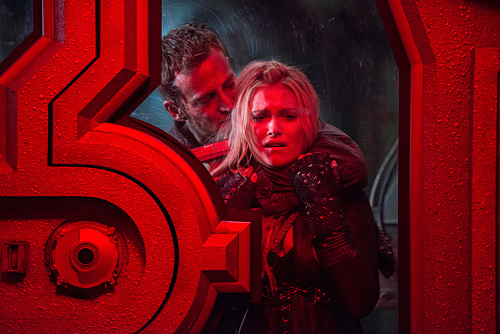 You Should of Killed Me When You Had The Chance

Clarke learned that no good deed goes unpunished. In what feels like ages ago, in the episode “Bitter Harvest” when Clarke let Emerson live while she was busy setting up policies that would lead to getting Lexa killed, it is only right that he came back to remind her that “Blood Must Have Blood”.

After abducting Harper, Bryan, Nate, Octavia, Jasper, Monty, and Raven, Emerson wants Clarke in exchange for her friends. Even though I howled at Bellamy’s plan of “You distract him, I shoot him,” which was slightly better than Clarke’s plan, Emerson should have just said “Bellamy, bring your silly self out from behind that corner.”

Instead of just shooting Clarke, or shooting the rest of the crew, or choking Clarke out when she temporarily broke free, Emerson was hell bent on Clarke feeling the same pain he felt. Um, Clarke doesn’t have 381 friends or otherwise for you to kill so it will not be the same. Just kill who you’re going to kill and be done with it. This does give Clarke enough time to voice activate ALIE 2 and attach it to Emerson, and it kills him.

Emerson didn’t abduct everyone as Sinclair got a fatal wound from his struggle with Emerson. He heartbreakingly had his last image of his star pupil, Raven, being taken by Emerson.

Emerson’s story felt a little bit like filler since it seems Clarke could have sped up this episode if she had just killed Emerson back at Polis. Hopefully this is a lesson learned for Clakre as she Octavia, Jasper, and Bellamy are on their way to find Luna. With the rest of the crew staying behind to see if they can find Alie 1 in the ark mainframe, I really hope Monty doesn’t do anything too stupid in hopes of bringing his mother back from the City of Light.

I’m glad to see Octavia get some closure by being able to give Lincoln a proper burial. I thought that after his death she would become more of a badass, but I guess I needed to wait until he was cremated. To think when I found out Emori was in this episode I was worried that she would fall victim to Ontari’s best Joffrey impression and it would be off with her head. Alie plays a mean game of chess as she quickly and easily took the role of Commander away from Ontari. Since Ontari was such a weak Commander, I wasn’t surprised by how Jaha could whisper a few words to her and have her falling for the okey doke. I guess Kane and the Grounders who took Pike must have taken the scenic route back to Polis since they have yet to make it there, and Jaha left Arkadia after them and has made it to Polis. By the time they get there I hope they realize – before it’s too late -that Polis is under newer management.