Six months ago on the Ark, Jaha, Abby, and Kane have a meeting with Pike to assign him teaching Earth survival skills to prisoners who would later become The 100 we all know and love. Pike realizes to teach these miscreants those survival skills, it will take at least 3 months, but Jaha was in full jackass mode when he tells Pike he has 2 weeks to teach them. After a few lessons that received less than desired results, Pike decides for a more hands-on lesson by putting his hands on Murphy. Pike commences to whip Murphy’s ass like he owed him money. Even though other kids jumped in to help, it was only when Pike got hit with a pipe that Murphy had enough time to get away. 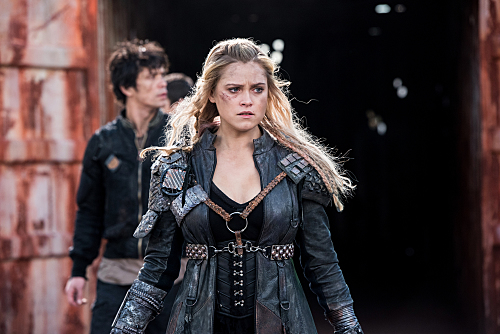 We Keep Going Until We Find Luna

Clarke, Octavia, Jasper, and Bellamy arrive at the Stonehenge landmark from Lincoln’s journal. After stumbling upon it by accident, Octavia finds out that green leaves will turn the campfire green and they believe this will be a signal for Luna. Meanwhile, Wanheda the peacemaker decides to help Bellamy out by telling him Octavia will come around; she just needs time. As they embrace, Grounders with scuba gear capture Clarke and Bellamy and then when attempting to capture Octavia, Octavia is able to talk them out of it by mentioning they are friends of Lincoln. The Grounder gives Octavia and the others an elixir that will knock them out instantly, but grant them safe passage. When they awaken without their weapons they are confronted by Luna. Clarke asks Luna to take the flame, but Luna decides not to take it. As Clarke and the others step out of the shipping container we see the that they are on an old freighter in the middle of the ocean.

Welcome To The New Age

Pike, Kane, and the other Grounders finally get to Polis only for Kane to see it’s not at all how he remembered it. The streets run red with pools of blood of the 3% who reject the ALIE chip, who are nailed to crosses throughout the streets of Polis.

Ontari and Jaha arrive, and Ontari orders her Grounders to take the chip, but as Jaha asks Pike and Kane to take the chip – they both reject it and are taken away. Pike is placed with the other Polis prisoners who refused to take the chip. Not only his his prize pupil Murphy in prison as well, Indra is here also and she has the look of vengeance in her eyes – she sees Pike as the killer of her 300 Grounder soilders. Indra decides to take her revenge in the slowest and most painful way by cutting Pike 300 times. Murphy intervenes and gets Indra to delay her revenge so they can formulate a plan against Jaha, ALIE, and the chipped inhabitants of Polis.

Meanwhile, Kane is in a more comfortable room set up by chipped Abby as a ploy to get info on Clarke’s whereabouts out of Kane. Even though Kane probably wouldn’t mind that loving from Abby, he does realize Abby is never that aggressive and figures out she has been chipped. That revelation sucks for Kane because Abby orders Kane put on the cross. The visuals to follow are among the most gruesome scenes of the series. As Jaha and ALIE are willing to use torture to get the info they need, they hammer stakes into his wrists to nail him to the cross and raise him up for the rest of Polis to see. Even then, Kane still won’t take the key or give any info about Clarke. Jaha has one diabolical trick left up his sleeve as he puts a gun to Abby’s head to get Kane to take the key and give away his secrets. Kane takes it to save Abby’s life. 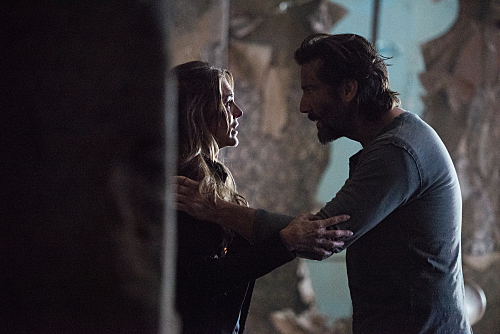 This was a nice, if not unnecessary history to Pike. It gives us a glimpse into Pike’s thought process when it comes to survival and how it is life or death and no one is coming to save them. It was cool to see Murphy and Pike’s history and thus we can add Murphy to the list of names of who will kill Pike this season. I don’t feel sorry for Pike at all just because he knew what Jaha was doing was wrong – he still didn’t do anything except whip a kid’s ass. I hope this doesn’t turn out where Octavia doesn’t kill Pike because of this Earth skills 2 week seminar.

I’m almost positive this will be a temporary setback for Clarke and crew. I’m the worst at predictions, but I still hope this sets up a chance for Octavia to persuade Luna to be the commander and potentially Octavia can take this role on Luna’s freighter. Hopefully, before this happens Octavia and Bellamy can make peace with one another. Jaha and ALIE waste zero time in capturing Polis. Is capturing Polis the phase 2 Abby spoke about or are there even more plans? I know how most of the main characters get into the Polis prison, but with Indra being so loyally blind, why would she not take the chip? I would have rather seen Indra’s story from the time she left Bellamy to now.