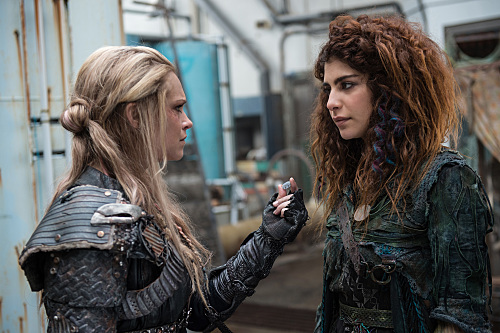 At Arkadia, Raven and Monty are trying to figure out a way to infiltrate Alie since she is still on the Ark mainframe. Apparently sleep is for the weak as Raven has been at this for 2 days straight. Monty wants to wait for Clarke, but Raven wants to do what she can from there. After a slight fun, but unearned, distraction from Harper, Raven interrupts Monty and Harper’s pillow talk to tell him she has found Alie’s citadel and that she is hiding something.

Even though Alie can sense someone attempting to access her citadel from Arkadia she won’t pull herself out because her other power source, her backpack, is currently compromised. More on that backpack in a moment.

Jaha uses Hannah to stop Monty from accessing the Citadel. However, Monty deletes what remains of his mom’s mind and Raven continues to enter the Citadel. Alie finally pulls herself out before Raven could execute it. Monty is pissed because they no longer have access to Alie and all of that was for nothing – and blames Raven for rushing in.

Monty leads the show in tragedies by having to kill his Mom twice in a few days. So even though I understand his pain, I really hope he doesn’t indirectly add to Alie’s control by delaying the team in some crucial way later in the next few episodes.

You Were Too Late

Pike, Murphy, and Indra form an uneasy alliance as they escape their prison. While the other prisoners try to escape, Pike and the others are going back to Titus’ temple to destroy Alie’s backpack.

Unfortunately they are met there by Emori, who is there to stall them until migration is completed. With Pike’s assistance they are able to separate the server from the freaking nuclear fuel cell in the backpack that would be able to destroy Alie’s power source. Emori is still able to stall Murphy long enough for migration to be completed, so Alie no longer will need the backpack Pike wound up destroying. Now Pike, Indra, and Murphy have to flee to regroup while Jaha sends a team to find them.

This show usually has so many great callbacks to earlier episodes and seasons. I would have loved  it if while Emori was talking about all the minds that would be lost if the server was destroyed, Murphy would have just simply said “socks for them” and destroyed Alie right there, but alas, Alie narrowly escapes to one of the Ark stations that are still in space. 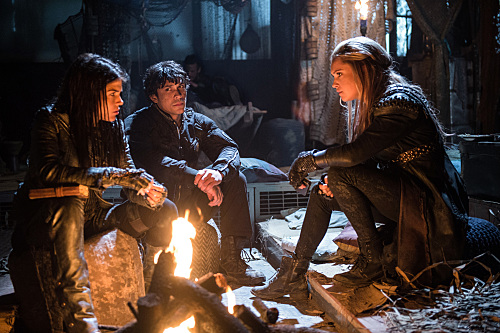 Luna is still not taking the Flame and after Luna kicks some knowledge to Octavia that Lincoln would have not come to her about fighting in this war, Clarke decides she will make Luna take the Flame by force. When Clarke gets some one-on-one time with Luna , she is easily overpowered and Luna explains to Clarke that she left the conclave because she knew she would win it and probably would have killed Luna in the second round, so you’re welcome.

Obviously when someone tries to stick an AI in your brain it gives you the right to kick them off of your peace rig. However, when Luna gets ready to kick Clarke and company off they are infiltrated by chipped grounders. They are able to lock Clarke, Bellamy, and Octavia in a container, and then Luna, Derrick, and Jasper are taken hostage.

Alie wants Luna to take the chip and then take the Flame, but it’s going to take more than water torture to get her to break. Derrick is more easily broken as he takes the chip to stop the torture she’s going through, but he is now forced to try and drown Luna to get her to take the chip. When they bring one of the Seakru kids to attempt to torture them to get Luna to turn (Yes, I’m calling Luna’s crew that is stationed in the middle of the sea, Seakru), Luna decides to kill her way out and kills her three torturers and her lover Derrick.

At the memorial ceremony for the fallen Seakru members, Luna drugs Clarke and company as she tells Clarke just since she believes Alie will do anything to win, they have to do anything. How is that any different from Blood Must Have Blood? Clarke and company wake up at Stonehenge with the Flame and all of their weapons. Bellamy asks the question we are all asking, “Now what?”

Luna was badass in this episode. She obviously is a beast at close quarters combat – how she was able to take out four Grounders larger than she was after being subjected to torture. Even though I wanted her to take the Flame so the last 4-5 episodes of Clarke’s motivation paid off the way it seemed it would, I’m glad Luna stuck to her guns and will protect Seakru and not become Commander to bail them out of a situation the outside world created. 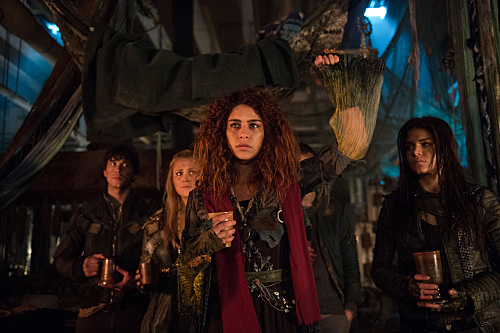 Clarke is back to square one as her mission to make the last nightblood the new Commander is over. Alie is making all the right moves as she is continuing to build her army and her hold on this world. I can’t believe I have to root for a team that has Pike on it, but here we are. Hopefully, Indra puts him out of his misery before the season is up.