In the penultimate episode Clarke forms an alliance and goes through hell to stop Alie. Meanwhile, at the Ark, there is a traitor in their midst.

I have given Clarke a lot of grief this season on the roles she has played by pushing blood must not have blood: Lexa’s and Titus’ deaths, her mishandling of Emerson, and her misreading of Luna. In this episode, she is determined to make it right. However, what type of Commander of Death would she be if death didn’t follow her. 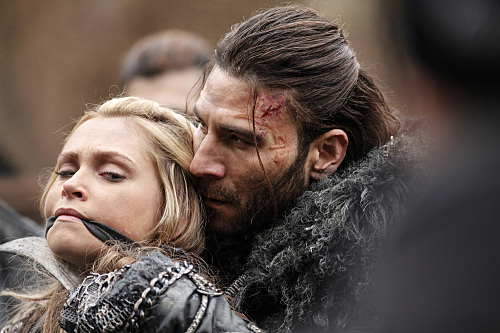 I Have What the Commander Seeks

After the fallout at Luna’s, Clarke and Bellamy discuss their next move and that Clarke knows she needs a nightblood in order to activate the flame. Fortune once again smiles upon Clarke as the King of Azgaeda arrives to save Clarke from an Alie soldier, and Roan happens to know a nightblood, Ontari. Clakre and Roan decide they want the same thing, but before Bellamy will allow him to come back to camp he shoots Roan in the arm to make sure he does feel pain and thus not chipped.

Or maybe Bellamy is getting a little payback from earlier this season when they first met in Wanheda Part 2 .

A hole in the arm for a hole in the leg, but at least Bellamy apologizes later. As the team of Clarke, Bellamy, Bryan, Nathan, Octavia, and Roan get ready to leave for Polis, Alie is in Arkadia watching them leave. Who took the chip?

When they arrive at Polis, they decide Roan will have Clarke as his prisoner to lure Ontari out with the flame. The rest of the team will cover them and gas the Alie soldiers so they can snatch Ontari with the gadget Raven gave them, and then insert the flame. Alie already knew this, and as usual she was a few steps ahead as Jaha came out to accept the flame. Once it’s clear Ontari isn’t coming, Roan tries to make a run for it only to be shot and killed by Kane. Before they can get the gas to go off the remaining members of the team are ambushed by Alie soldiers and Clarke is taken away. 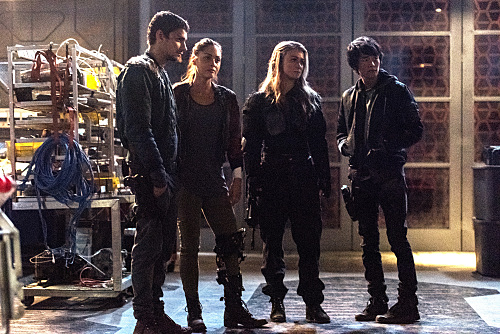 Oh yeah, about that traitor… it was Jasper! He showed his true colors by stabbing Monty with a rusty ass screwdriver while they were looking for equipment for Raven. Luckily, Monty was able to get away with the motherboard Raven needed and lock themselves in a room so Raven could try to break into the City of Light. Jasper does take the time to explain why he took the chip, and of course for him, a woman was part of the reason. Even though Raven is close to reentering the City of Light, Monty begins to worry about his new boo, Harper, and for good reason. She doesn’t know that Jasper is chipped so once she comes to the door Jasper gives her a damn concussion by running her head into the steel door. Jasper threatens to kill Harper unless they let him in and they stop the machine Raven is working on. 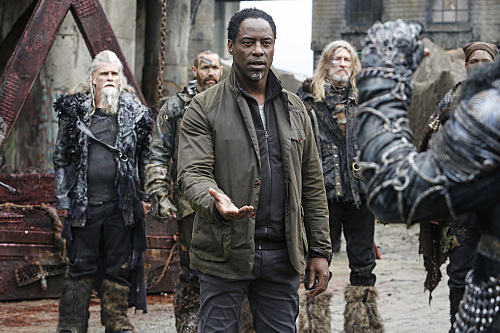 Doing the Right Thing Can Kiss My Ass

In the throne room Clarke is tortured by Abby, but Clarke will not break and tell them the pass phrase. So they decide to bring Bellamy in and use him to get Clarke to talk. As the guards attempt to bring Bellamy to the throne room the guards are met by Murphy, Pike, and Indra and the 4 guards are shot and killed by Pike and Indra. Yes! Indra used a freaking gun! Desperate times call for desperate measures.

To Murphy’s chagrin, the two crews decide to join forces and stop Alie once and for all. Bellamy and Murphy fight and kill their way towards the throne room. Alie sees this and decides she wants to use more extreme measures. Abby sets up a noose to hang herself and only Clarke can stop this by giving the pass phrase to Alie. Even with her mother hanging there in front of her Clarke, will not give it up. As Murphy and Bells make their way to the top Alie senses this and goes for her contingency plan so they do not acquire Ontari. Ontari grabs a metal rod kneels to Jaha, gives Jaha the rod and allows him to knock the living hell out of her. Murphy and Bellamy break in and Bellamy shoots Jaha and takes the flame from him while Murphy cuts Abby down. (More on that in a moment) Unfortunately, as they prep Ontari to take the flame even though she is still alive she is now brain dead due to the blow Jaha gave her and now she cannot take the flame at all.

This would be so much easier if Alie could just control Jasper and rattle off the names and how they died like he did to torture Raven and Monty. Even though I’m not an AI, I’m freakishly good! Roan killed one Alie soldier, Kane killed Roan, Indra and Pike killed four Alie guards, Pike killed 2 elevator controllers and Bellamy shot a guy in the face at point blank range. Those nine kills bring the season total to 393.

Wait a damn minute. Did Jaha feel pain when he was shot? He cried out in pain when Bellamy shot him. What happened to not feeling any pain in the City of Light? We do see him in the City of Light multiple times. I hope that this is not an oversight on the writers and this goes somewhere because we never see Jaha take the chip. Could he be manipulating Alie all this time? What will Clarke do after another failed plan to insert the flame into a nightblood? Will Octavia jeopardize the mission by getting revenge on Pike for Lincoln’s death? Did Indra and Kane survive the explosion? What will Monty do to save Harper? How long can Clarke, Bellamy, and Murphy hold the throne room before Alie reinforcements arrive? How will they defeat Alie now? Find out this and more next week on the electrifying season 3 conclusion of The 100!