Clarke begrudgingly stars in her own buddy cop show after an unexpected reunion. Chancellor Abby decides to set up to Dr. Abby with some state of the art medical supplies. The City of Light gets some new residents.

There Is No Pain in the City of Light

We finally get to see what Jaha sees in the City of Light while he’s in his meditative state and it is stunning. Jaha swears to A.L.I.E that he will fill it with his people. Of course, Otan shows a little curiosity to Jaha about the City of Light and Jaha can’t wait to show him whats it’s all about… off screen, of course.

Meanwhile, Emori tells Murphy that they have other buyers besides A.L.I.E , and she attempts to steal the backpack that powers A.L.I.E from Gideon while he’s in the City of Light. Bad move because Emori gets choked and lifted off her feet by Gideon until she kills him by cutting his throat. Before Emori and Murphy can leave Otan starts an intense standoff by holding Emori at knife point to trade for the backpack. They make the trade and as Emori and Murphy get away, Jaha goes back to the City of Light with Otan. There he learns there is no pain, no disease, and no death, as Gideon arrives to give the homeboy head nod to Jaha.

So if A.L.I.E still believes that there are too many people, instead of just killing them her plan is to give them this fake paradise while in the real world they blindly serve her wishes. It appears that Jaha is not above killing to ensure the City of Light flourishes. 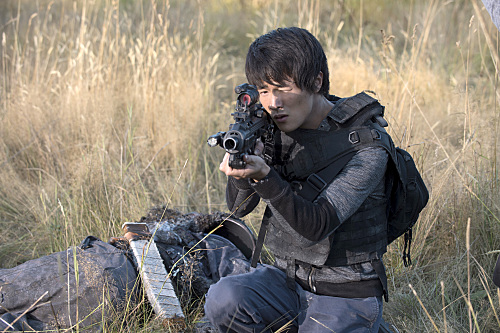 At Arkadia, we catch up with Octavia and Lincoln about to get some morning loving in when Lincoln’s best friend Nyko comes in on horseback severely injured by the Ice Nation. His wounds are serious and Abby doesn’t have the supplies at Arkadia to save him. They decide to go back to Mount Weather since their medical facilities are state of the art. They are able to heal Nyko, but then decide that they can no longer let the resources at Mount Weather go unused and decide to re-open Mount Weather.

Lincoln gives the greatest smh look to Abby when she makes this decision. He told her last week that it’s not a good look to keep pillaging Mount Weather, so she decides to set up shop there. The optics on the truce they have with the Grounders are going to be challenged when it looks like the Arkadians are colonizing more land. 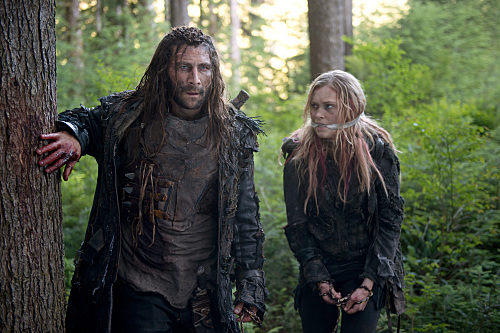 You Wanted the Commander of Death? You Got Her

As Clarke is being taken to God-knows-where, her attempts to escape from her kidnapper only end in failure and more dead bodies on her conscience. Luckily, the team of Bellamy, Indra, Kane, and Monty are right on her trail. When we left that team they were trapped by unknown assailants. We find out very quickly they are trapped by the Farm Station survivors lead by Pike. Pike’s crew has not had as much luck with dealing with grounders due to the fact that the Ice Nation has killed roughly two-thirds of the Farm Nation, and thus he is firmly on team #GrounderKillers.

The side-eye every time Pike looks at Indra is epic. Be careful, brother, Indra might cut those eyes out and hand them to you.

As they are chasing Clarke and finding the trail of bodies, they also run into an Ice Nation army marching south. Indra has to break away to warn her people. The remaining team decides to hide in a cave to allow the army to pass before they continue after Clarke. Bellamy, however, is a master of disguise and blends in with the army to go after Clarke. Bellamy finds Clarke, but also finds out that this isn’t some Mt. Weather soldier. Bellamy is easily over powered by the kidnapper and almost broke the hearts of all Ballarke fans by damn near getting himself killed. Luckily, Clarke was able to beg for his life and Bellamy only ended up with a hole in his leg so he couldn’t continue following even if he wanted to. Bellamy is forced to take the team back to Arkadia to get patched up and regroup. 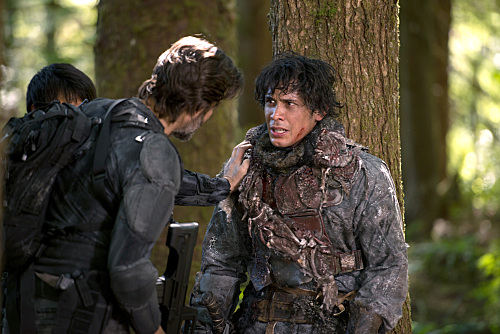 Clarke finally reaches her destination and her kidnapper is revealed as Prince Roan of Azgadea, the son of the Ice Nation queen. Clarke is handed over to Lexa, of all people. Roan wanted his banishment lifted in exchange for Clarke, but since his momma dares march toward Lexa he gets locked up instead. Lexa apparently has looked forward to this reunion, but Clarke has fire in her eyes and spits in Lexa’s face, screaming she will kill her.

The survival of the fittest stakes don’t get any higher on this show, but last week 3 Ice Nation scouts and a panther started the body count at 4. This week, Emori kills Gideon, or she would have ended up on this list and 3 other Ice Nation scouts are killed courtesy of Ice Nation Prince Roan’s skills with a knife and an arrow. By the way those 3 deaths are on you, Clarke! This week’s body count is at 4 for a total of 8. Math is fun!

This episode kept the plot moving in the right way with enough twists and reveals to keep us aching for next week’s episode. Abby is going to have to make a decision on what she wants to be. Chancellor, Doctor, or Mother because those titles are working against each other and you can already see this going downhill real quick. Hopefully Jasper’s visit to Mt. Weather will get him going in the right direction to getting over Maya’s death. I can’t wait to see how Lexa and Clarke confront each other. Last season, Clarke learned so much from Lexa on how to be a leader, but with her being so viciously betrayed we’ll see if she can put that hate aside for the eventual war that is coming.