A week has passed since Clarke was brought to the capital city of Polis, when Lexa decides to come to Clarke’s quarters to talk to her. Clarke still doesn’t want a thing to do with Lexa. After Clarke checkmates Lexa on her decision to abandon the Arkadians at the battle of Mt. Weather, Lexa offers Clarke’s people, Skaikru, a seat as the 13th clan of Lexa’s coalition. Clarke sees this pretty easily as Lexa’s play to make herself look strong by having the Legendary Wanheda bow to her to make up for leaving the battle of the Mountain. Clarke proclaims she will never go for this and never bow to Lexa.

Clarke is later approached by her kidnapper, Prince Roan of Azgaeda, with a proposition: kill Lexa not only to go home, but to have her revenge in exchange for a grateful Queen Nia, the leader of Ice Nation. When the time comes, even though Clarke has Lexa with a knife to her throat, she can’t kill her. Clarke decides the greater good is more important than revenge and to talk Kane and Abby into joining the coalition, becoming the 13th clan to prepare for the potential war brewing instead of negotiating a treaty. 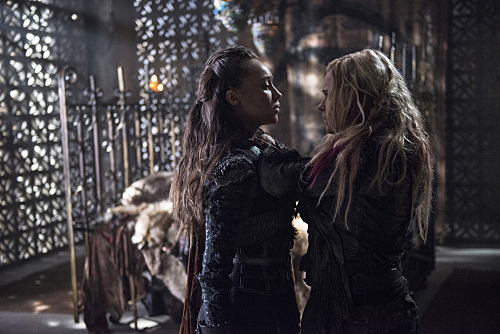 Now Is Not The Time For Good Intentions

In Lexa’s circle there is dissension among the Clans about Lexa’s course of action – she is becoming weaker and why Wanheda is still alive. Even as she trains with younger Grounders known as Nightbloods, one manages to land a hit on her. Lexa speaks to Titus the Fleimkepa, which appears to be the title of the advisor to the Commander – a task he has had for 4 Commanders – and he doesn’t feel having Skaikru join the coalition will truly be accepted. He urges Lexa to prepare for this war properly by killing Wanheda and taking her power. Lexa still feels having Wanheda bow in front of the coalition at the ceremony of Skaikru joining will suffice.

Pike has moved more than half of his people from Farm Station into Mt. Weather. Pike wants to fortify Mt. Weather and get the missiles operating to attack the Grounders. Gina, Raven, and Sinclair are there figure out the launch codes. While Octavia keeps shaking her head how this isn’t a good look, she and Bellamy are approached by a captured Echo. Echo is the Ice Nation grounder who was in the cell next to Bellamy when he infiltrated Mt. Weather last season. She warns them of a grounder assassin who will kill Skaikru at the summit. After interrogating Pike , Octavia, Echo, and Bellamy decide to go to Polis to warn Kane and Abby. When they arrive in the middle of the ceremony, all things aren’t as they seem as Echo ditched Bellamy and crew before they got to the ceremony. 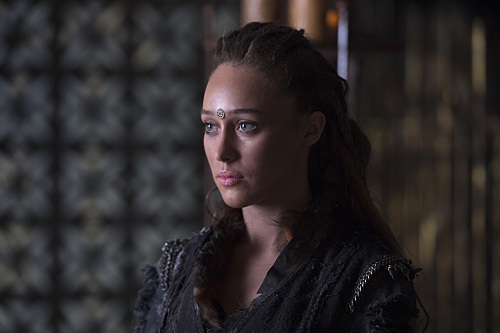 You Have Your War

When Bellamy, Octavia, and Pike arrive at the ceremony it turns out that there is no assassin at Polis. Raven radios in that the grounder assassin set off a self-destruct sequence that destroyed Mt. Weather and the only survivors are Sinclair and herself.

The Ice Nation delegate immediately takes responsibility for this act of war because Lexa was too weak to do this herself. Lexa has the Ice Nation delegate and Prince Roan arrested. Abby, Bellamy, and the rest return to Arkadia to prepare even though Clarke stays behind as a representative at the capital. Lexa bows down to Clarke to swear fealty to her and promises to treat her needs as her needs. Echo arrives at the Ice Nation camp to inform Queen Nia the war has been started, and thanks to Emerson the last of the Mountain Men, who apparently gave up the self-destruct codes. 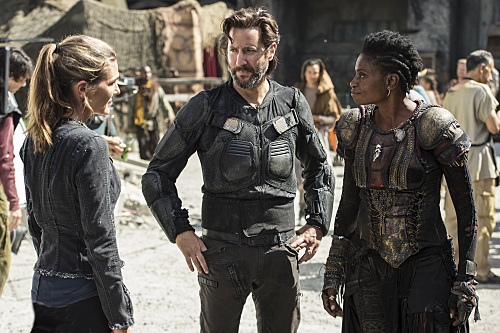 The 100 is continues to bring the heat this season. No City of Light this week for all you true believers out there, but there was way too much going on to shoehorn that storyline into this episode.

The 100 must have a ton to do this season because they are not wasting any time moving this plot forward. Last week, Lexa said a war was coming and this week Queen Nia has her war. No need to keep watching Abby make mistakes as chancellor and doctor, and she graciously gives the chancellor role to Kane so he can be great and not make emotional decisions.

We see that the dissension is brewing with Lexa’s coalition, but I am interested to see how the Arkadians deal with this loss. I know what Pike is thinking after losing so many of his people at Mt. Weather. What if Bellamy begins to see his point of view after losing his boo thang Ginain in the same attack. Also it’s nice to see that Bellamy doesn’t’t trust Lexa at this point remembering how she left them to dier. Clarke’s response of go float yourself was excellent even though I’m pretty sure Lexa has no idea what that meant. In all seriousness, every point Clarke hit was on point, which begs the question even with a war brewing and Lexa actually ending up bowing to Clarke, how can she trust Lexa when the time comes?