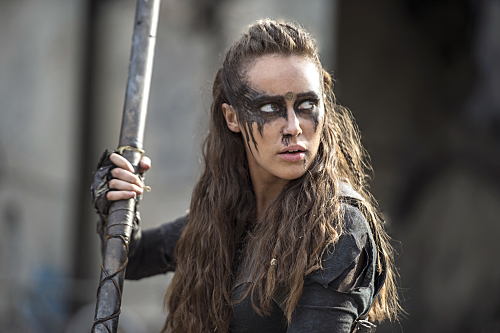 Queen Nia is brought to Polis as a prisoner because she takes responsibility for the attack at Mount Weather. Nia had her own plan since she began a vote of no confidence which 12 clans agreed with, however, Clarke still has that new clan scent on her and she opposes it. This leads to a challenge for leadership of the coalition.

Prince Roan will be Nia’s champion, but Lexa needs no one to fight for her and she will do it herself. Clarke does not want Lexa to fight Roan because… he’s a beast, but Lexa is ready to die if it’s her time. After Roan receives a pep talk from Nia about lifting his banishment and becoming a legend of Azgeda when he brings her the head of Lexa, the commander of death meets with Roan.

Clarke discusses with Roan about killing Nia and becoming King. Roan isn’t having it, but suggests a way for Clarke to kill her. Later, Clarke meets with Queen Nia and asks for protection of her people and Nia is prepared to agree by binding them in blood. Nia’s nightblood Ontari sees through Clarke’s deception and stops Queen Nia from using Clarke’s poisoned blade to cut herself.

Nia declares Skaikru as an enemy to Azgeda, but before she leaves, Nia bathes Clarke in the blood of her nightblood Ontari. Before the battle, Clarke pleads with Lexa not to go through with the battle, Lexa again refuses. She is ready to die and has her successor in place (Aden) if she dies. Titus is not pleased with his Heda putting herself on the line, but informs her that it is time for battle. The fight is magnificent. After Roan got the upper hand and was ready to strike a killing blow with a spear, Lexa turns the tables, but instead of killing Roan, she decides blood must have blood and throws the spear through the heart of Queen Nia, and then proclaims “Long live the King!”

Wow. Queen Nia we hardly knew ye. At least we know that Lexa ain’t lose a step as she was able to get the best of the new Billy Badass a.k.a. King Roan. I do not need to know why he was banished because he is treacherous as hell. Last week, he gave Clarke a knife to kill Lexa and this week he is giving Clarke tips on killing his mother. I guess he will react to however the situation suits him. I hope we get to see Ontari sooner than later. The way she sniffed out that poison Clarke was trying to pass onto her queen was fierce. It seems Lexa and Clarke are getting pretty close once again so I’m waiting to see how cozy they get, and more importantly, how that affects how Lexa is perceived by Titus and the rest of the coalition. I guess if they don’t want a spear through their chests they will chill out. 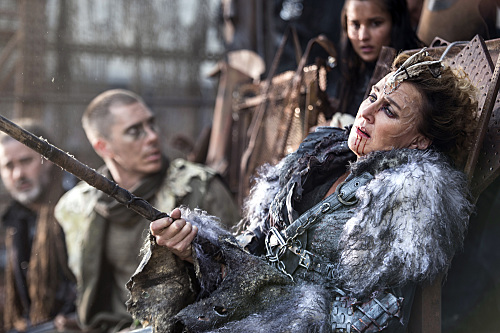 Let’s Finish What We Started

At Arkadia, Pike is pleading with Kane to attack the Grounders, but Kane isn’t with that because the Grounders only attacked Mt. Weather to send a message to Lexa. Pike is not pleased with this and he storms off.

Bellamy goes to Kane to resign, because if he hadn’t trusted that Grounder, Mt. Weather and the rest of their people would still be alive. The tension between the Arkadians and the Grounders continues to grow as wounded Grounders come to Arkadia to be tended to, but only receive a chilly reception from the Arkadian guards. It’s only when Octavia and Nyko show up that the wounded are helped. This tension reaches a fevered pitch at the Memorial for those lost at Mt. Weather when news comes that a Grounder army of 300 set up a mile outside of camp.

Even though Kane and Abby are aware of this peacekeeping force sent by Lexa to protect them from any other Ice Nation attacks, Pike is furious and wants the army to leave. Pike begins getting additional supporters from the Arkadians, which leads to a small skirmish that leaves Lincoln with a gash on his head from a thrown rock. Later, Pike tells Bellamy that if he can get some guns, Pike will have the men attack and kill every Grounder in that army. Like a dumbass, Bellamy agrees, but they are stopped at the gate by Lincoln and a couple of Benedict Arnold Arkadians, who later move out the way to allow them to pass.

However, Lincoln stands firm to prevent a war by holding the rock thrower from earlier at knife point. Kane and Abby arrive to arrest them, but not before Bellamy leads a chant for Pike. Since there is a vote of leadership tomorrow, Pike is given the title of the new Chancellor. Chancellor Charles Pike has three immediate actions with his new title. First, pardon himself and his fellow treasonous friends, including Bellamy. Second, reject their title as the 13th clan of Lexa’s coalition. Lastly, get ready to finish what they started with the Grounder army.

With all the politicking and speeches he was doing this episode, Pike was made to be an elected official. I still can’t get over him pardoning himself. Pike, we get it. We know you’re not going to be locked up as Chancellor. That said, I don’t think Pike is long for this world. I mean, really, who have you killed, Pike? All I hear is that you’re angry that your people are being killed.

Pike and his ten guns are nowhere near enough to defeat Indra and her 300. Bellamy should know better than this. I truly understand why he is doing it. Even though Bellamy knows all Grounders aren’t the same, Ice Nation killed the girl he “loved,” I guess. Lexa left him and the rest of the Arkadians to die at Mt. Weather once her people were freed. Bellamy isn’t as close to Lexa as Clarke is thus, he has no reason to believe it won’t happen again. So, I hate his decision, but I understand it even though he has come such a long way. He’s the opening credits voiceover for crying out loud. I hope for his sake Bellamy has more of a plan than 10 vs 300. 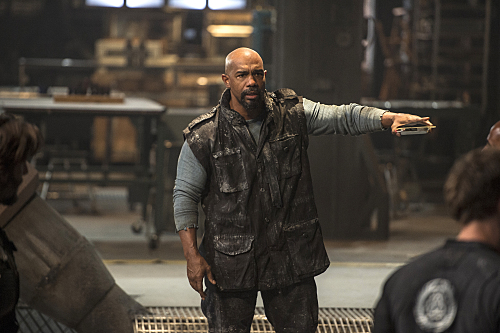 Only one death this episode, and it was Queen Nia via spear by the baddest chick, Lexa! Queen Nia death by spear!

Slight correction from last week as it seems there were some Arkadians, besides Gina, at Mt. Weather as well as the Farm station 35 since we were told a total of 49 died.

The season body count so far is 63.

The episode was very good. Not as fantastic as last week’s – a lot due to how heavy-handed Pike’s character is and the quick removal of Queen Nia. Jasper appears to be out on his own since Monty is done with his self-destruction and Jasper spilled Finn’s ashes. Octavia really wants to leave and it’s good to know that the kill order has been lifted from Lincoln. Not sure which allies are left for Abby and Kane since the vote for Pike was a landslide, but they can’t sit by and watch this war – that they cannot win – start. Hopefully, this wasn’t the last of Ontari and even Aden the eventual successor to Lexa. I really want them to flesh out those Nightbloods and the rest of the Grounder heritage.