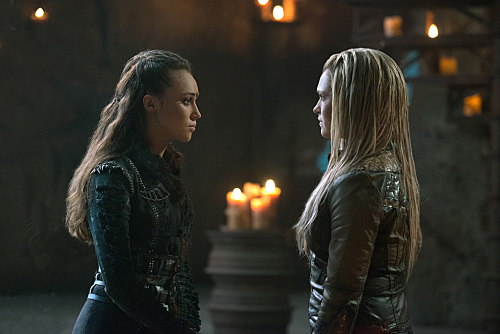 May You Live Forever

We find Clarke in Lexa’s quarters watching her sleep while creating a portrait of Lexa sleeping. Lexa is awakened from a nightmare. The former commanders speak to Lexa in her dreams and they are not happy with her dishonoring their legacy of Blood Must Have Blood. While Clarke is reaffirming to Lexa that this cease fire is the right course of action, Titus interrupts with a gift to Clarke from King Roan of Azgaeda. It’s a peace offering to show their loyalty to Lexa and the answer to how the Grounders knew how to destroy Mt. Weather: Emerson the last Mountain Man.

Clarke wants him executed for his crimes, but Lexa rightfully challenges Clarke on the hypocrisy of why is it only blood must not have blood when it’s Lexa’s people who bleed. Titus does use this as an opening to show Lexa that they only way to peace is once the violence has been satiated. Lexa tells Clarke that either Emerson is to be banished or he must die at her hands by 49 cuts. Later, Titus has an intense one-on-one conversation with Clarke where they discuss how what Clarke wants to do to Emerson is no different than the motto the Grounders lived by. When it is time to decide Emerson’s fate, she chooses banishment to Titus’ dismay. Lexa co-signs Wanheda’s action because she knows that one man cannot answer for the actions of the mountain. Lexa promptly banishes Emerson to live the last of his days as the last of his kind.

I can’t see how Clarke is likable in these last few episodes. She encouraged Lexa into this new way for the Grounders, but when it came to her following the same it took Titus to inadvertently talk her out of killing Emerson. She even admitted to Titus when she was checkmated during their conversation that she can’t encourage a motto that means going to war with her people. I wonder how much Lexa swearing fealty to Clarke is clouding her judgment to this potentially fatal road she is traveling. Even though the growling was a bit over the top, I loved Emerson in this episode and I can’t wait to see him come back. C’mon, that’s not a spoiler! They didn’t kill him so you know he’s gotta come back! Damn Murphy can’t catch a break. I mean I am mildly annoyed by Murphy most of the time, but whipping his ass like that, Titus? Yikes. I’m sure he’ll tell you anything to get the pain to stop! 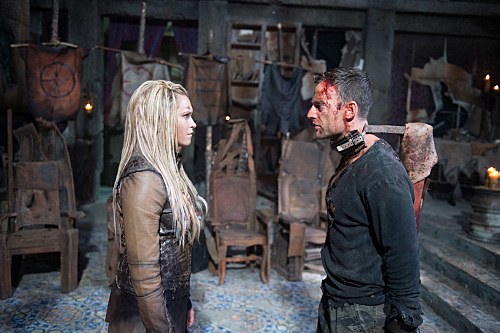 Do What Needs To Be Done

Hannah and a small team are out in the field gathering soil samples, but Octavia is following them while radioing Kane to see what they are up to. Octavia doesn’t get to find out because she has to save a Grounder kid Hannah was ready execute for getting too close.

By planting a bug in Pike’s office, Kane and Octavia were able to find out that Pike is ready to wipe out a Grounder village to grow crops for Arkadia. Even though Bellamy and Monty aren’t on board with wiping out a Grounder village, they go to the village and are willing to do what needs to be done to keep Arkadia self-sufficient and thriving.

Octavia goes to warn the Grounder village to evacuate to prevent more death and potential retaliation from Lexa on to Arkadia. She’s greeted with less than open arms from Semet, the leader of the Grounder village. She gets welcomed with an ass whooping before the kid she saved from Hannah steps in to vouch for her. However, while the Grounders appear to evacuate, they are actually setting a trap for the incoming Arkadians. They knock Octavia unconscious to prevent her from warning them.

Octavia breaks free long enough to warn Bellamy and the others it’s a trap, but not before two Arkadians are killed in the poisonous gas. Octavia is recaptured by Semet and the others as Bellamy and his team goes back to camp. Pike calls Bellamy to his quarters to debrief and knows they need to talk about Octavia. Those two deaths are on her because even after she warned the Grounders about something, she should not have even known the trap was set. Pike and Bellamy do figure out that Kane is getting information to Octavia, but Pike needs Bellamy to find some proof of this.

Nice to see Octavia get some more to do in this episode even though she needs a little more of that Indra grounder training – she had a rough time this week. Hannah is the worst. I fear her redemption story, if they go that route, will come with Monty’s death behind this madness. I hope Kane doesn’t find himself floated or worse because Pike strikes me as an off-with-his-head type of leader. What? No one used a float pun this week so I’ll help ’em out. I’m still trying to figure out what Bellamy is thinking because on the outside he is all “we gotta do what needs to be done,” but in private (especially with Pike) he is challenging this road they are going down. 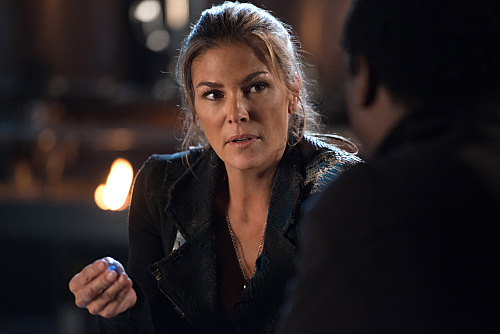 I Decided I Suffered Long Enough

Abby is running a physical to see if there are any dangerous side effects to Raven taking the A.L.I.E chip besides her new sunny disposition. Jaha is now full on cult leader with Arkadians lining up to be fed the A.L.I.E keys. Does Jaha have to place it in their mouths? Even though Abby can’t find anything medically wrong with the keys she watches on and discourages Jasper from joining. With Raven back to work A.L.I.E has a request for her to assist her in finding version 2 of her programming. A.L.I.E tells Raven that the reason it may be on the space station computer is because her creator wanted a more secure environment from A.L.I.E. From A.L.I.E? After talking to Raven about the key Jasper decides to talk to Jaha to address his own pain but not before ole Buzz Killington , Abby jumps in to ask Jaha about the actual science of the keyp. With a little bit of motivation from A.L.I.E Jaha breaks it down to Abby, and basically it stops the brain’s pain receptors. When Abby continues to press and Jaha appears to forget that he had a son who died on Earth Abby decides to shut Jaha down and takes the keys from him. Even though Jaha is frustrated Abby has enough of Arkadians that have already taken the key to have Abby’s aide keep an eye on her. 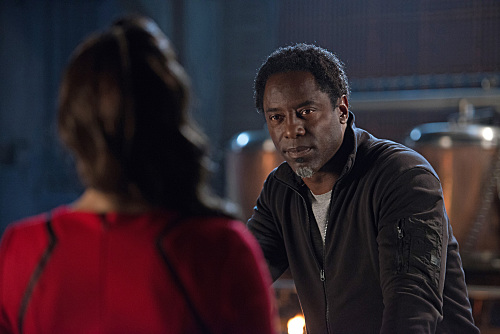 Two additional deaths courtesy of poison gas delivered by the Grounders. I wonder if they learned about gas by the losses they took from the acid fog that Mt. Weather used.

Total season deaths are at 364.

The 100 continues to kill it with these strong episodes week after week. I love how fast this show moves the plot right along and we don’t have to wait too long for answers and reactions to situations.

With that being said, Bellamy needs to make a decision soon about whether he is with Pike or with his sister, because she’s in Pike’s crosshairs now.

I wonder what else Lexa has planned to keep this ceasefire going. There has to be some meeting with Pike because even though the word is out, what’s to stop Pike from attempting to burn additional Grounder villages to the ground? The big reveal about the 13th station for starters being blown out of the sky to deceive the other survivors to unify is unbelievable. As well as Polis getting its name from the 13th station Polaris crashing down. What are the Grounders doing with that technology and what do they know about A.L.I.E. Finally, what are Jaha and Raven going to do when they find the upgrade for a program that ended the world? I have my ideas, but would love to hear yours in the comments!