Previously on The 100, ‘‘Bitter Harvest’ 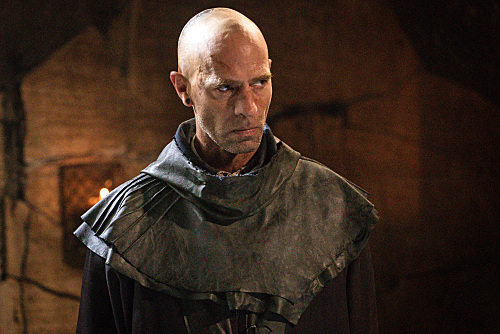 What Have I Done

To begin this story we have to go back to the end of the Earth. We find Becca working on Alie 2 and trying to get the neural interface down. Becca and her assistant receive a message from Earth saying A.L.I.E has broken through the black ice encryption and is searching for nuclear launch codes. A.L.I.E is successful and all Becca can do is watch from space as nukes are fired first on to the U.S. from China. Then the U.S. missiles are fired and this cycle appears to continue with all major countries until there is nothing left on Earth.

Two years have passed and we see Becca injecting herself with what appears to be “nightblood” (the black blood we see nightbloods bleed) and Commander Cole McAdams interrupts Becca to tell her that she has to float the genocidal AI that ended humanity as we knew it. Becca pleads her case to continue to work on Alie 2, to save the remainder of the human race, but McAdams isn’t willing to take that chance and goes to get something to float all Alie 2 hard drives, prototypes, and information but not before Becca locks them out of her lab.

McAdams tells Becca that Alpha station will open fire on this station, Polaris, if they do not begin docking maneuvers. Becca is willing to begin the docking maneuvers, but McAdams wants Alie 2 floated so that the AI doesn’t “infect” the other 12 stations. Becca continues to refuse to do this and takes an escape pod with her Alie 2 information to Earth. As Becca leaves in the pod, McAdams tries to tell Alpha station they are preparing to dock, but it is too late. Alpha station uses this to send a message that they are living under extreme rules and shoots the station out of the sky. Becca touches down on Earth and she is able to take off her helmet even though there are high levels of radiation. As she sees other survivors, Becca yells to tell them she is here to help. 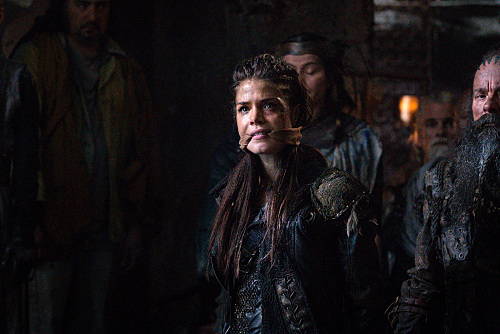 Blood Must Have Blood

At Polis, it is Ascension Day where all of the former commanders are remembered, but it is interrupted by Semet, who brings in Octavia as prisoner to show that the Arkadians are still attempting to take lands. This forces Lexa to gather the 12 clans to institute a blockade around Arkadia to prevent them from taking any lands. This blockade will be enforced with a kill order if Arkadian attempts to pass it. Titus was hoping Lexa was gathering the 12 clans for war and this was not the vengeance Semet was looking for. He attempts to murder Lexa right there, but Titus steps in and kills Semet and reminds Lexa that “Blood Must Have Blood”.

I am glad through their argument – even though some harsh jabs were thrown – there is a mutual respect between the two of them, and Titus doesn’t come off as trying to start a coup or wanting the position of commander for himself. He seems to truly want what’s best for Lexa and the coalition. It’s nice to see that Lexa acknowledges this even through their disagreement.

Meanwhile, Octavia is basically begging Clarke to come back to Arkadia to help save their people because she knows Pike will march more Arkadians right to the blockade and cause more death. Even though she doesn’t necessarily want to, Clarke agrees to go back but not before being able to say goodbye to Lexa. When Clarke sees Lexa they both know she must go and they “embrace” before Clarke leaves.

And when I say “embrace” I mean have sex! This scene was definitely earned from last season. All the moments they have had this season from damn near killing Lexa, the apologies between each other, swearing fealty to Clarke, and cleaning wounds, all of these moments and more had an intimacy to them. The chemistry between these two cannot be denied. 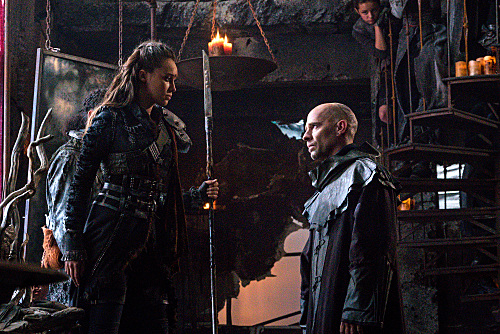 As Clarke begins to leave she sees a tied and bound Murphy. Titus appears to basically attempt to frame Murphy for killing Clarke and hopefully this will make Lexa go to war. Unfortunately for Titus he is a terrible shot and through the ruckus Lexa arrives to receive a fatal stray bullet in the stomach. While literally on her death bed, Lexa makes Titus swear not to harm Clarke. Titus agrees to this. Clarke gets a moment to say her passionate goodbye to Lexa.

During that moment someone started chopping onions in my room as I watched this and my eyes started stinging. Imagine that!

Titus asks Clarke if he can fulfill his purpose and complete the ritual. Titus turns Lexa over to reveal an incision on the back of her neck that has the A.L.I.E infinity logo tattooed over it. When Titus cuts through it the A.L.I.E 2 AI is revealed. Murphy calls it that, but Titus corrects him and calls it the spirit of the Commander. Titus carries Lexa out of the room to begin the conclave, however Clarke and Murphy are locked in the room.

Lex and Semet. The season body count is at 366.

What an emotional ride. I would definitely tell anyone to rewatch this episode especially for the stuff on Polaris with Becca. Becca does come off a bit unlikeable as she saw that A.L.I.E ended the world, but was too blinded by trying to resolve that that she couldn’t see McAdam’s point of view. Even though she blamed McAdams, she sentenced them to death to continue working on Alie 2. I know there is a significance to the “nightblood.” I just wish there was a part two to this episode to show what Becca actually did when she touched down and how she spread the Alie2 AI.

It’s nice to see Octavia getting Indra back in the fight and ready to take her revenge. Ooh, I can’t wait for Indra vs. Pike, or, hell, Indra vs Bellamy!

It was so sad to see Lexa go even though a lot of us saw it coming. Even with it being a bit telegraphed it played out wonderfully. I personally would have liked to see her die in combat to some ninja assassin Grounder, but this is even better because Titus has to live with Lexa dying at his hand accidentally. I hate to see Lexa leave. Hopefully we’ll see her in a few flashbacks to when she came to be Commander, but I am super intrigued for the fallout and how Clarke, Titus, Indra, King Roan, and the Arkadians take her death.