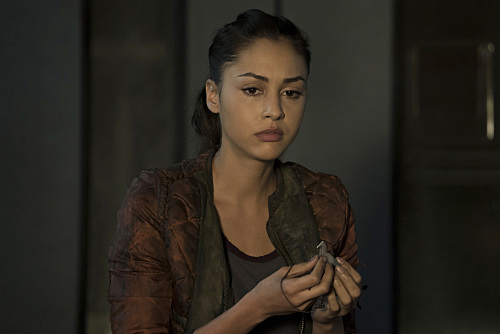 This is a Terrible Idea; I’m In

Jaha and Raven talk about recruiting more people for the City of Light to assist A.L.I.E in finding verion 2 of her programming. Without the chip maker that was confiscated by Pike and Abby, it’s going to be hard to do so they decide to recruit Japser to assist with getting it back. With Monty being in charge of security Jasper should be able to figure the password out since they were besties.

While in the mainframe room, Raven asked Jasper for A.L.I.E what type of things Monty likes that he might use for his password. This was pretty cool how Jasper would rattle off colors, places and such and A.L.I.E would just run combinations of them numerically and figure it out. They finally figure it out and it’s off to Pike’s office. That was a little more secure than your birthday, Monty, but not secure enough.

In Pike’s office, Jasper brings up Finn’s death, but Raven doesn’t remember it, and since it gave her pain why would she want to remember it? Jasper finds the chip maker, and brings up Finn and Raven’s first kiss, which Raven also can’t remember. Raven is frustrated about this and even with A.L.I.E telling Raven to take the chip maker and go, Raven appears to snap free of the hold A.L.I.E has on her, snatches Jasper, tells him to run and that A.L.I.E can’t be allowed to have it. A.L.I.E later tells Jaha what happened and that once she speaks to someone they always listen – no one has ever gone against that. Her programming doesn’t allow her to override free will. Jaha assures her that he believes he can.

I really liked Jasper for the first time this season and was happy that he inadvertently helped Raven to break free of the hold A.L.I.E had on her. I did miss Abby. It seems like she should have been somewhere in this episode. Raven is going to play the perfect foil to A.L.I.E and preventing her from whatever goals she may have for the planet. I am really worried what Jaha may have in store for Raven and Jasper but it seems they have lost so much already. What could he do? 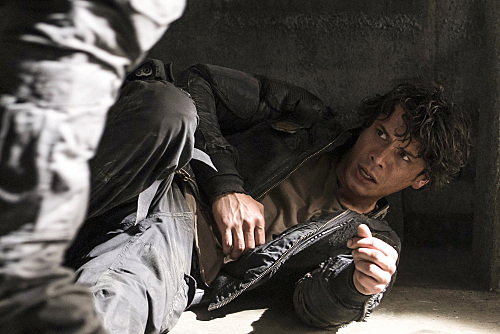 Nothing Has Changed My Mind

Hannah tells Pike and Bellamy that one of the recon teams has not reported back after radioing they ran into a Grounder blockade. Like clockwork, two Grounders on horseback arrive at the gates of Arkadia to confirm to Bellamy, Pike, and the others that there is a blockade, they killed that recon team slowly and they will kill more Arkadians slowly if they don’t turn Pike over. One of the Grounders tells Bellamy to do what is right for his people and Bellamy replies “I do that every day, nothing has changed my mind” and proceeds to kill both grounders with 2 shots. Bars!

With the blockade preventing the Arkadians from hunting, Pike decides that before they can attack the Grounders they must deal with Kane and the internal threats within Arkadia. Kane is listening in  and decides to have a one-on-one with Pike. Kane pleads with Pike to surrender himself to the Grounders to save their people, but Pike reminds Kane that when they turned over Finn the Grounders still turned on them.

With Monty on the team overseeing security, they find the bug planted in Pike’s office and set a trap for Kane. Kane and his team fall for it, and while Sinclair tries to sabotage the rover, he is caught by Bellamy and charged with treason. Even though Bellamy, Hannah, and Pike appear to play bad cop, badder cop, and I-didn’t-sign-up-for-this cop, Pike decides to lock Sinclair up until he gives names and information on the rest of Kane’s crew.

This appeared to be part of Kane’s plan, because once in the prison Sinclair tells Lincoln to be ready. Kane again meets with Pike. Pike wants Kane to negotiate the terms of his surrender, but this is part of Kane’s trap – simultaneously, Sinclair and Lincoln are starting a riot in the prison.  Kane shock lashes Pike unconscious, throws him in the back of the Rover, and makes a run for the gate. Monty overhears Kane’s radio transmission and warns Bellamy the riot is a diversion and Kane has Pike. Bellamy is able to get through the prison riot to the gate and points a gun at Kane to make stop him at the gate.

Kane is arrested and sentenced to death. Bellamy is pissed that they are killing their own people now. As Kane is taken away, Bellamy and Monty are talking about what to do about Miller when Hannah arrives. Hannah congratulates them on a job well done, but asks if they were able to find any other conspirators. Bellamy jumps in to say no. Hannah then tells them that it feels good to do what is right for your people. Bellamy replies that I do that every day. More Bars!

Well, Bellamy, it took you long enough, but welcome back to the winning team. I’m glad Pike was given a little bit more to talk about than “take the fight to the Grounders” because he was on point with what happened after they handed Finn over. Even if they turned Pike over, I don’t see all the Grounders saying all if forgiven – especially with their leadership in flux after Lexa’s death. With Monty, Brian, and, of course Bellamy having second thoughts about what they are doing to keep their people safe (not to mention the food shortage being caused by the blockade), it’s only a matter of time before another internal uprising occurs. Will it be too late? 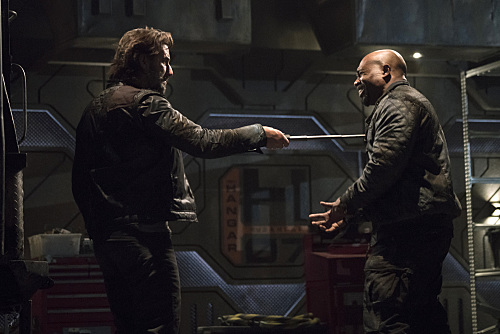 This episode was a little bit of a drop from last week’s emotional roller coaster of Lexa’s death and more of A.L.I.E’s backstory. There were a lot of one-on-one conversations that did not feel as strong as the performances in the last few weeks. The riot scene was great even though I didn’t get to see Lincoln lay dem paws on Bellamy, but I guess he’s back so I’ll never see my death match between them. If Jaha does anything to hurt Raven I will lead the next riot!