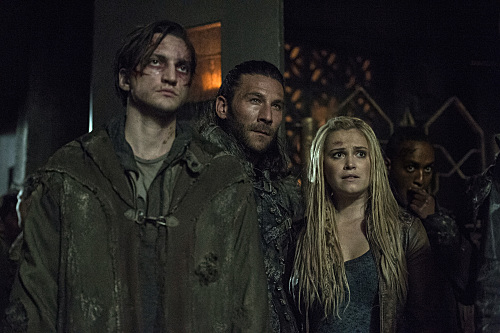 Your Duty Is To The Flame Now

Back at Polis and in the aftermath of Lexa’s death, you can clearly see how distraught Titus is for what he has done to Lexa. I really appreciate the subtlety in his change of character from Blood Must have Blood to being visibly somber, and feeling responsible, as he should, for Lexa’s death. Titus still is a member of team petty, though, and also blames Clarke for killing Lexa. This, even after Ontari bursts onto the scene to take what she feels is her birthright by killing the Polis nightbloods, beheading them in their sleep. Through Clarke and Titus’s conversation they realize Luna, a nightblood who left Lexa’s Conclave rather than fight, is still out there and could challenge the title of Commander rather than giving it to Ontari.

Titus gives Clarke the “flame” aka A.L.I.E 2 , tells Clarke to find Luna and gives her his current position: Fleimkepa. Fleimkepa ….Flame keeper? It’s like a light bulb went off in my head when they said this. I’ll be speaking grounder by the end of the season.

Ontari has little respect for the ways of the Grounders. First, by not actually competing in the conclave for the title of Commander and again when she realizes Clarke is gone with the flame –  she still wants to be ascended because the people won’t know she doesn’t physically have the flame.

Great idea. We never knew Lexa had it in her neck until she died – doesn’t show a lot of integrity, but hey, go for it! As her first act as Commander she tells King Roan to find Clarke. 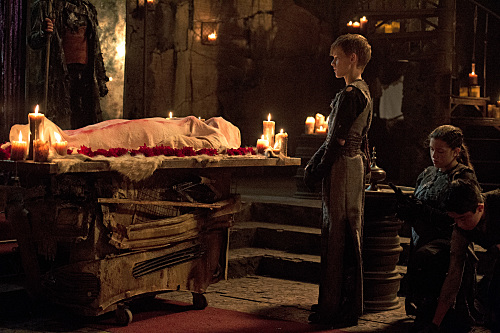 Show Them A Way Out of the Darkness

At Arkadia, Pike is ready to send all of his prisoners to death but is talked down to only executing Kane, Sinclair, and Lincoln. Bellamy is finally ready to come back to the side of Kane and does so first by removing the bug that was planted by Nate. Then he meets with Octavia to figure out a plan to save Kane and the others. Octavia, for the first time in her life, doesn’t need Bellamy’s help and drugs him and ties him up with Indra standing guard. I am so pumped that this episode felt like Octavia’s coming out party for this season.

She is able to slip in and start the breakout with assistance from Abby, Harper, Murphy, Nate and Bryan. Hell, she got everyone at the secret door to freedom until Pike made the announcement that if the escapees don’t turn themselves in, the Grounder prisoners will be executed in their place. Lincoln could not leave his people to die. Lincoln turns himself in to Pike, and Pike personally executes Lincoln in cold blood by shooting him in the head for all to see, including Octavia. Her tears quickly turn run dry and that emotion of sadness turns to a blood lust to avenge Lincoln by returning the favor to Pike.

I hated to see Lincoln die but I understand why he died and can live with it. This is war and sometimes people we like will be a casualty of that war. He was a great noble character, but he died for what he believed in. Lincoln’s kill order had been lifted early in the season and he could have left on numerous occasions, but he chose to stay by his people to fight for his quest for peace with the Arkadians and the Grounders. Lincoln would have betrayed his character if he just left the Grounder prisoners to be executed in his place. I am thoroughly enjoying this season and I want to give the writers and actors a lot of credit for being able to pull so much genuine emotion from the fan base. I just hope they don’t put out a pseudo apology later for killing Lincoln. Let’s allow the season to play out before we crucify them.

We already spoke on Lincoln’s death, but Titus also died this episode. While Roan held Titus at knife point to get information about Clarke and to perform the ascension ritual, Titus would rather die than assist Ontari. Titus also decided to drown himself in Ontari’s bath water. The season body count is at 372. 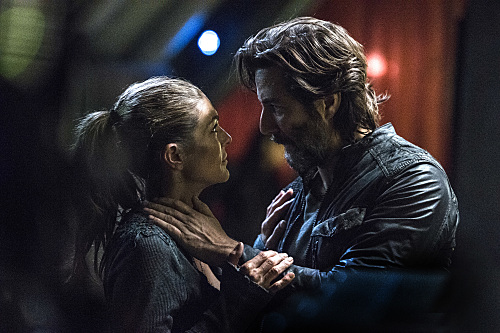 Another great episode. As much as I hate Ontari, I love how fierce she is. Even if Clarke finds Luna before Roan finds Clarke, will she be able to do a thing against this Ice Nation-trained killing machine? Murphy is always going to find a way to survive and it looks like Ontari has caught his eye. She saw you looking at her step out her bath, Murphy. Emori who?

Even though I don’t see the chemistry between Abby and Kane its good to see her assisting, and, more importantly, willing to stay at Arkadia to fight the good fight.