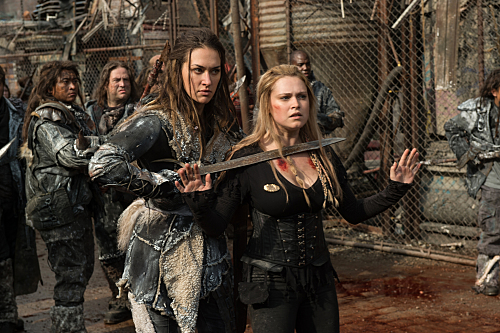 Saving The World Can Wait

We pick up moments after we left the series at the end of last season. Clarke and Bellamy leave the tower to discuss the impending danger from the radiation of melting nuclear reactors. The Grounders called this the Praimfaya when this happened 97 years ago. Before Clarke and the others can leave they see a fallen King Roan, who is still alive but needs medical attention because there is a bullet inside of him. Echo, the commander of the Ice Nation army, however doesn’t want Skaikru to touch her king and snatches Clarke up at sword point. When Clarke freed everyone from the City of Light, there were 1,000 Ice Nation soldiers in Polis. Echo thanks Clarke from freeing them and returns the favor by letting her go. As Roan is being healed by the Ice Nation healer, Echo decides to take over Polis in the name of the Ice Nation.

Kane sends one of the Ark guards and a group of Arkadians out of Polis through a secret passage. Clarke, Bellamy, Kane, Abby, Octavia, Jaha, and Indra meet in private to be brought up to speed on the impending Praimfaya and how to deal with the immediate threat of the Ice Nation. Clarke suggests they surrender.

The plan starts off with Jaha bringing in Ontari’s covered dead body to Echo so she can be with her people.. Echo accepts, but has her guards beat the brakes off Jaha for being the bringer of the key. For the stunt Jaha pulled last season of giving everyone the key and forcing them to the City of Light he deserves this and more.

The only reason the Ice Nation guards stop is because they hear of Skaikru’s surrender. Bellamy appears to be negotiating with Echo, but he is stalling to allow Octavia, disguised as the dead Ontari, to kill the guards in order to let Clarke and Abby in to save Roan. The two of them are able to remove the bullet from Roan, but Ice Nation guards appear with Echo before Roan revives. As Echo attempts to strike Clarke down with her sword, Roan does awakens long enough to save Clarke and the others lives by throwing them in a cell.

Echo is fiercely loyal to Ice Nation, but urges Roan to kill Clarke, the Wanheda, and take her power. This will avoid him looking weak in the eyes of Ice Nation and he would have done what his mother nor Onatri could do and that is rule over all of the clans. Roan then meets with Clarke and Clarke tells him of the impending Praimfaya and asks him to uphold Lexa’s coalition keep Skaikru as the 13th clan so they can attempt to stop this. Roan tells Clarke that it will cost him his life if he allows them to leave.

Clarke offers the flame to Roan and this will allow him to be the unchallenged King and he can choose the next Commander himself when another Nightblood ascends. Roan accepts this and gathers the citizens of Polis and tells them there will be no more killing and Skaikru will be allowed to be the 13th clan. Roan makes it clear that an attack on Skaikru is an attack against them all. Roan conveniently left out the part about the Praimfaya because that would cause mass chaos among all the clans.

Afterwards, Echo has a look on her face like she’s just here so she doesn’t get fined and gives them a symbol that allows them to walk into any of the lands unharmed. Bellamy, and Clarke say their goodbyes as they leave with the Jaha and a crew of Arkadian guards back home to try and find a way to survive the Praimfaya.

At Arkadia, Jasper is keeping the drinks flowing after their victory over A.L.I.E. Raven doesn’t have time to get liquored up because she is trying to get the Arcadia mainframe back online so she can contact the crew in Polis. Jasper notices that Raven can read code even though she isn’t a coder. Jasper hints that A.L.I.E has upgraded Raven’s brain. Jasper wishes he was still in the City of Light and is bummed that he didn’t get an upgrade.

Jasper managed to take Harper’s gun when she left her holster unattended. Speaking of Harper, we later catch up with her and Monty having victory sex and having pillow talk on where their relationship goes now that the threat is over. Before they can go deeper into the conversation Raven tells them to get dressed and meet to discuss why they are all gonna die. Jasper, however, is about to permanently end his pain by killing himself. He left Monty a letter and put Harper’s gun under his chin and is about to pull the trigger when Monty knocks on his door. Jasper puts his death wish on hold to meet with Monty, Raven, and Harper. Raven brings them all up to speed that the nuclear reactors were to last 100 years without melting down and their “warranty” runs out in 6 months and there is no way to stop it. Everyone takes the news pretty hard except for Jasper, who laughs it off, gives Harper back her gun, that she didn’t realize was missing, and leaves to go and watch the sunrise.

As Echo stated in the episode “ You slaughter us, we slaughter you.” With so many clans there is always going to be conflict that is usually settled by force – as an ambassador found out when she challenged Echo’s claim of Ice Nation taking over Polis. This ambassador quickly lost her head by a single sword swing from Echo.

Badass Octavia got a chance to show off her Trikru stealthy murder skills by killing 2 Ice Nation Guards by simultaneously stabbing them in the heart, then killing the Ice Nation healer with a spear that looked like it could pass for a Mortal Kombat fatality. This season Body Count is at 4.

This episode did a good job of setting the table for what to expect this season. Murphy and Emori are back to being the post-apocalyptic Bonnie & Clyde. Jaha is on a path to redemption as he tries to atone for his many, many sins from last season by being the bringer of the chip. Jasper continues his downward spiral from before he took the chip. Bellamy and Echo have to face off again because they have so much baggage. Also, how long can Roan keep the coalition together without causing chaos by telling them about the upcoming Praimfaya in 6 months? Of course they have to find some way to survive the Praimfaya. As that poor soul found out in the last scene it is instant death. This was a strong start to the season and I can’t wait for next week!