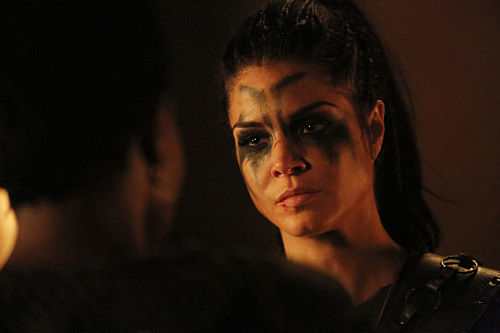 Do You Really Think She Has A Chance

At the start there were 13 clans and if you’ve been paying attention there are maybe 3 clans (Trikru, Azgaeda, and Skaikru) that have a legit chance to win this conclave. Now it was nice to see Ilian step up to fight for his people, but the game changer is when Luna steps up to fight as the last of her clan and thus the extinction of humanity. Now don’t get me wrong, even with Luna arriving, smart money is on Skaikru to win this because of TV magic. Still, the writers did a masterful job of building suspense throughout this episode to make you question how they would get to that likely outcome. Octavia skills as Skyripa were toned down a bit for this episode as she followed Bellamy’s suggestions by hiding and not trying to take all of them on — just focus on killing the last champion. 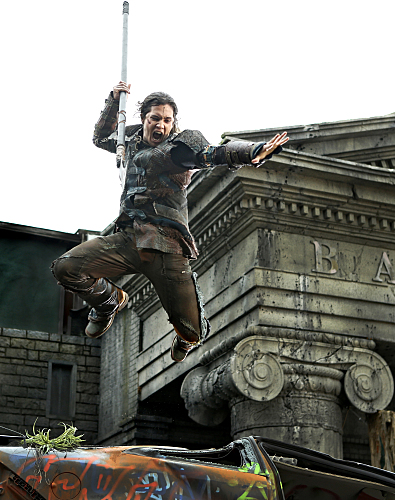 After Octavia sees Roan kill two champions, including the Trikru champion, she runs into Luna. As they share words about Luna’s reasons for trying to end humanity and also what Lincoln would have thought of all this, Octavia manages to escape Luna and finds herself surrounded by three champions, but Ilian comes in to help. After the two of them kill their attackers, their alliance is short-lived. Ilian takes a paralyzing arrow through his throat. Ilian offers Octavia his sigil and tells her to kill him. Octavia begrudgingly obliges.

I Am The Darkness; We All Are

As time passes and they get to the final four, Roan offers an alliance to Octavia so they can kill Luna together. Octavia agrees and not a moment too soon as Luna appears having just eliminating another champion. As Octavia and Roan attack Luna they get a bit of the upperhand until the black rain hits. Octavia runs for cover, but Roan stays and tries to fight. Unfortunately for Roan, Luna is not fazed by the rain and strikes a wounding blow to his stomach before she drowns him in a fountain of black rain. As Luna stalks Octavia and begins her super villain monologue (I never knew Luna was so long winded), Luna stabs a closet she believes Octavia is hiding in, only to be stabbed in the back by Octavia. As Octavia comes back victorious, she tells everyone that Skaikru will share the bunker with everyone, because they are all one clan.

It Was Her Idea

Let’s rewind to just before Ilian was killed. The archer that killed Ilian was none other than Echo, attempting to help her king and save her people. Bellamy had a hunch she was cheating and snuck up on Echo the spy, and began to choke her with his bare hands until Roan interrupted. Once Echo told Roan why he was there, Roan was disgusted that she thought this is how Roan wanted to win. Roan banishes Echo from Azgaeda and allows Bellamy to leave. Before Bellamy could make it back to the tower he is snatched up and taken. Bellamy awakens in the bunker ran by Skaikru in front of Clarke and Jaha. Clarke decided that if only one clan could live, it might as well be them. Clarke has locked Skaikru inside with Octavia, Kane, Indra, and the rest of the clans. Skaikru has betrayed them all.

What an episode! The fight scenes were the best of the season. The stakes were as high as they’ve ever been, and I was on the edge of my seat the whole hour. I don’t agree with it, but I love Clarke’s treachery. I can’t see how Bellamy and Clarke make it out of this season together. There is no way on Earth that Bellamy stays in that bunker and lets his sister burn in Praimfaya. Not to mention how Abby is going to react to Kane not making it in. When Luna gave that speech about how she learned how selfish, cruel, and violent humanity is from Skaikru, she was not lying. I love how this show has turned our heroes into villains as we get to the last 3 episodes of the season.