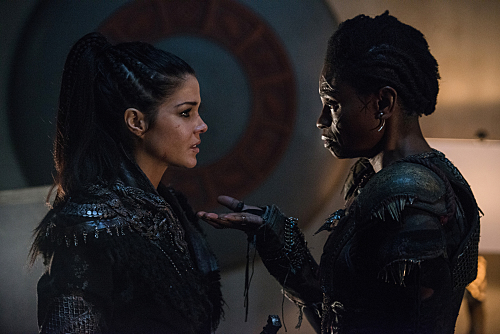 “I Love You, Big Brother”

Bellamy radios Octavia and tells her their plan to go to space for the next 5 years. Octavia has concerns about the people in the bunker looking up to her for leadership and direction. Bellamy continues to assure her that she can do this and tells her how far she has come from being the floor girl on the Ark. Octavia gets a chance to tell her she loves him, but before he could say the same, the radio goes out because of the interference of Praimfaya. Still at the bunker, Indra tells Octavia it is time for her to lead the people by telling them what life will be like in the bunker. Indra assures Octavia that the time for the Flame and nightbloods has passed and this is her time now. Indra hands Octavia the symbol Lexa used to wear on her forehead now proclaiming that Octavia is their Heda. 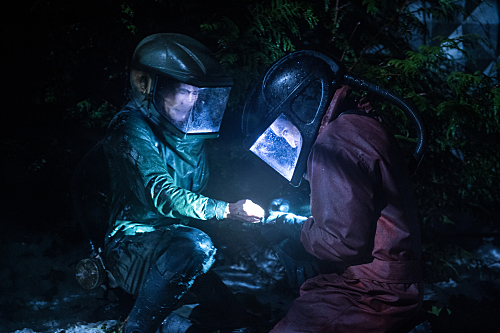 “Tell Us What We Have To Do To Live”

With Monty and Murphy going to the lighthouse to retrieve the oxygenator, Raven has her own problems at the lab when the communications goes out on the rocket. The problem with that is they won’t be able to communicate remotely with the Ark in space to open the hangar doors. What they decide to do is to use a satellite tower on Earth to send a signal to the Ark so they can get in that way. As Clarke, Raven, and Bellamy are on their way to the tower they run into Murphy with the oxygenator. Murphy had to leave Monty behind because Monty exposed his hands to the radiation to unhook the oxygenator and has passed out due to the pain. Bellamy and Murphy go to get Monty. Raven takes the oxygenator inside the lab to load on to the rocket and Clarke goes to the tower to get the satellite to transmit the signal to “turn on” the Ark.

At this moment, I just knew they were going to kill Clarke and I felt strangely sad like “maybe Clarke wasn’t so bad” and I started to miss her before she was gone. So kudos to the writers for making me feel that type of sadness for a character who, before this episode, I felt more hate for than love.

Once Clarke got to the tower she had to climb to the top of it. Unfortunately, there wasn’t enough time to wait for Clarke and the team of Raven, Bellamy, Echo (after Bellamy talked Echo down from killing herself) Monty, Murphy, Emori, and Harper. Once they got into space the Ark was still not powered on until Clarke manually pulled the satellite into position to get a signal. Even though the power went out on the console, she carried it was enough to get the power to the Ark.

I have never been so satisfied to see a vent start blowing air and see someone start breathing again as when I saw those kids be unselfish and work so well as a team to save each other. They awaken, and Bellamy and Raven make a promise to each other that they will not let Clarke’s sacrifice be in vain.

Once Clarke got down from the tower she had to race back into the lab to try and outrun the Praimfaya. As she got back to the lab the mask to her radiation suit had cracked open and she took it off only to show her face being affected by the radiation and she passes out on the lab floor of the lab. 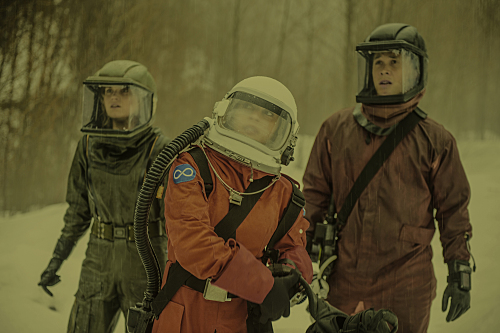 2,199 days after Praimfaya, Clarke is healed and awake and she is radioing Bellamy as she has appeared to have done many times before. Clarke questions Bellamy, with no response, on why they haven’t come back to Earth since it’s been safe for over a year to come back. Clarke isn’t sure if Bellamy is dead or alive, but is holding out hope. As for the bunker, she mentions in her radio transmission that it’s covered in rubble and “we” weren’t able to dig them out. She asks Bellamy to tell Raven to aim for the one spot of green on Earth since the rest of the planet sucks. At this moment she sees a ship come out of the sky. Clarke goes back into the rover to awaken a young nightblood child. This is not the ship Bellamy Raven and the others left on. This ship is huge and menacing with decals such as “Eligius corporation”, “Cell block B,” and “gargarin prisoner transport”. As this ship prepares to land Clarke tells the young nightblood to go back to the rover and load up ALL the guns!

Outstanding episode! They truly saved the best for last as this episode did exactly what a season finale should do. It closed all the major storylines in ways that were more than just satisfying, the tension hit its zenith and it leaves you aching for the next season. This even makes last week’s episode at Polis seem even better as that can be considered the finale for the remaining crew at Polis in the bunker. It was done beautifully. If you missed it, Abby was alive before they left for space and at least knows how to deal with the brain damage that plagued her and Raven since Raven told her how to rid herself of it before the radio went out. Bravo to the show they can go in so many different directions for the next season (which has been renewed! YAY!) I can go on and speculate for forever on what they will do next. I’ll be wrong because like always, they do it better than I can imagine every season. I still would love to hear your thoughts in the comments below. Feel free to drop your predictions and thoughts there and we can pass the time until season 5 together.