Previously on The 100, “The Four Horsemen” 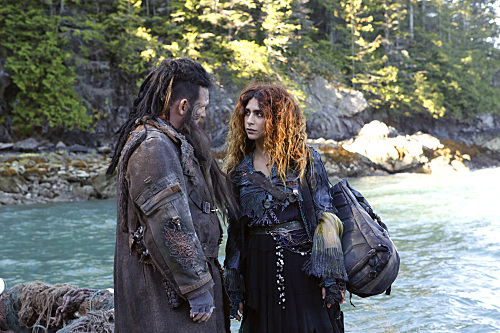 I Never Met a Line I Wouldn’t Cross

Abby and Miller lead a team to an island with Becca’s lab, in hopes to reverse engineer Luna’s blood to so everyone can become a Nightblood and survive the radiation. Once they arrive, Luna confides in Nyko that she feels like a prisoner and wonders what Skaikru would do if she refused to help. They reach an invisible fence that is formed by multiple pillars. Emori has never crossed it because it states “No Frikdreida (mutants) past this point.”

Murphy has never been one to follow rules and encourages Emori, as well as the others, to cross it. After they cross it a drone appears and shoots one of the Arkadian guards in the head. As the rest try to run for cover and shoot the drone down, Nyko sacrifices himself for Luna. Miller is able to finally shoot the drone down as Luna uses this time to run away from the team. Raven stays on the shore while the rest of the team searches the island for Luna. Once Luna tries to leave via the boat they came in, Raven holds her at gunpoint.

Raven and Luna proceed to go back and forth on whether or not Skaikru and the other clans deserve to survive. Raven is able to persuade Luna by bringing up the young girl they brought to Arkadia for help. She was innocent to the infighting and this brings Luna back around to helping Skaikru. The team regroups and find Becca’s lab. The lab is state-of-the-art and seems untouched by any Grounder tribe, but what were the drones supposed to keep out?

It was cool seeing Miller in a leadership role without Bellamy and he held his own keeping the group together. I want Abby to be a little more careful since she is one of the few capable doctors left; we don’t need her to be a diversion. Send Murphy out there he’s expendable. Although, Murphy has been growing on me as a character I’m starting to root for. Also, with Murphy still keeping that bunker a secret from last season, I wonder how long it will be before Murphy steals enough supplies for him and Emori. I feel like the Luna waffling on helping or not helping the team was forced. She just came to the camp asking for help despite how she treated Clarke and the others last season when they asked for help. Now, after she went all the way to the island she decides to temporarily go back on helping them? I’m glad Raven got a chance to be a reluctant hero in that scene, and they didn’t have her just using science as a fix to the solution, but appealing to Luna’s morals. 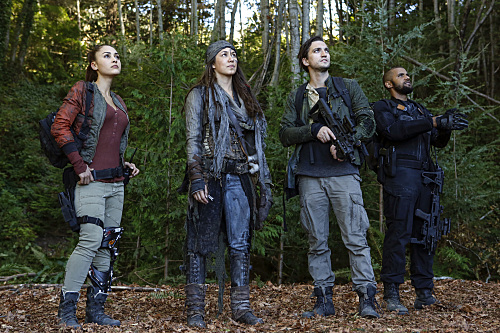 Truth Is the First Casualty Of War

In Polis, Kane scolds Octavia on her recklessness and unnecessary killing. When Kane is summoned by Roan, Kane sends Octavia away as he no longer wants her as part of her security detail. He tells her to go back to Arkadia until she can learn the lesson that justice and vengeance aren’t the same thing. Roan tells Kane that Echo found Bellamy and another Skaikru soldier in the woods looking for food. The soldier told them that they are building the ark to shield Skaikru from the radiation and they have a Nightblood. Kane tries to explain the situation, but is cut off by Roan who stated that if their intentions were pure, Skaikru wouldn’t have kept this information from him.

Roan proclaimed the alliance broken and calls for the death of Skaikru and Trikru, takes Kane and Bellamy as prisoners, and orders the capture of Octavia and Indra. Oh, and that loose-lipped Skaikru should have gotten his throat slit because warriors don’t reveal their secrets. Octavia originally wanted to speak to Indra before she left, but when she arrived at a Trikru station in Polis, they were massacred by Roan’s Ice Nation soldiers. One Trikru soldier told Octavia in his dying breath that Indra left to warn the others and that Octavia will be pursued by Ice Nation. 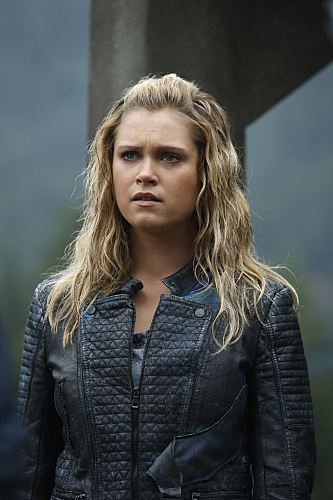 As Octavia tries to escape back to Arkadia and warn her people she is being chased by Echo and two Ice Nation soldiers, who corner her at a cliff. Octavia has no intention of being taken alive or otherwise and proceeds to kill two of the Ice Nation soldiers. Echo breaks Octavia’s sword and stabs her straight through the stomach. Octavia still refused to be taken alive as she falls off of the cliff into a river. In the final scene of the episode we see that Octavia is still alive and is able to crawl back on her horse and head home.

Even though Octavia survived a stab to the stomach – eerily similar to one Oliver Queen and a fall off of a cliff that would give Wile E. Coyote pause – I will stop rolling my eyes long enough to be happy she’s alive. I love the character and her fight is not yet over. Seeing her humbled in this way will hopefully make her a stronger warrior and just a killing machine. On the flip side, it will be intriguing to see how Bellamy reacts as he goes through his five stages of grief upon hearing the news that his sister, who he has protected her whole life, is dead.

Roan breaking the alliance was brought on by Skaikru period.  Roan had every right to be kept up to speed on  what was happening and the progress Skaikru made. I wish the writers gave Skaikru a better reason for not at least keeping Roan up to speed on what is happening, but I am happy that at this point Roan could care less and is ready to do what is necessary to help his people survive. Even though Roan did not want Echo to kill Octavia he has no time to mourn as he prepares to take Skaikru’s radiation salvation, the Ark, by force.

It was nice to speed up the 100 list Clarke made and how its existence would be taken by Skaikru. Luckily Jaha was able to save it for Clarke by telling them there will be a lottery to determine the 100 who make it back on the Ark. That’s slightly better, but I agree with Jasper (even though his suicidal actions are becoming a pain in the ass): you’re in trouble if you’re trusting Jaha. I don’t trust Jaha and I am waiting to see how he turns on Clarke and makes this about him saving his people. I am stoked that Abby, Raven, and the others are in Becca’s lab. The Becca backstory is intriguing to me and I hope we get additional flashbacks of what Becca did when she came back to Earth – especially how she chose and created the Nightbloods. I hope this confrontation with Ice Nation and Skaikru ends quickly. We have been through multiple seasons of fighting between Skaikru and this clan or that clan. There are larger stakes, so even though Roan is 1000% right in his actions, I hope it is resolved quickly since you know all of the human race is at stake and the radiation could give a damn about the tribes. With Roan, Echo, and all of Ice Nation on one accord ,I can’t wait to see what Clarke does to try and save her people, yet again, from this Grounder threat.