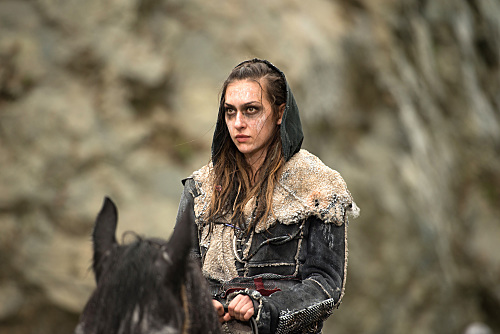 Off the heels of a thorough defeat at the hands of Echo, we find Octavia on the way back to Arkadia from Polis. You might not be fit to ride a horse, however, if you were recently stabbed through the stomach and fell off of a cliff. When Octavia falls off her horse, Illian is there to help. He brings her the rest of the way to Arkadia where Clarke and Nyla try to save her. In her weakened state, Octavia is able to tell Clarke that the Ice Nation are coming. Clarke uses this time to get Skaikru soldiers in position to meet Ice Nation before they get to Arkadia. Nyla takes Octavia to the med bay, and this literally leaves Illian all alone in Arkadia.

Oh my, what is a grounder that deeply despises technology to do in the base of the most technologically advanced clan? More on Illian in a minute. 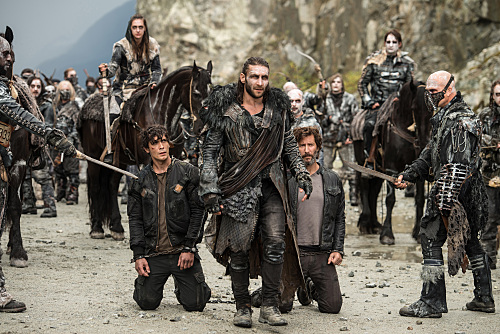 War Makes Murderers Of Us All

Clarke is able to meet Roan, Echo, and their Ice Nation warriors before they get to Arkadia. Roan isn’t in the mood to talk so he has his archers target Clarke. Clarke, not to be outdone, has her shooters target Roan. It is revealed that Skaikru soldiers, led by Miller’s Dad David, are hidden in the mountains. So to continue this Tommy Topper competition, Roan brings out his prized prisoners Bellamy and Kane. Clarke has no other moves to play except to ask to talk. That’s called checkmate, Clarke.

As Roan and Clarke step away to talk, all of the archers and shooters take their aim off of the leaders except for Riley. He won’t stop targeting Roan and feels since he was held as a slave to the Ice Nation, they are not to be trusted. Monty is able to talk Riley down and get him to stick to the plan before he causes war by assassinating their king.

Clarke and Roan go over a lot that we already know, including why Roan is trying to take Arkadia for his people and Clarke’s rebuttals on what she and her team have been doing to try and save humanity. Although, as Clarke states the ship is only a backup plan and that they are working on the Nightblood solution, Roan hints for the first time that he may not believe Octavia when she said the Flame was destroyed. Regardless, the two of them come to an agreement that they will split Arkadia for 50 members of Ice Nation and 50 members of Skaikru to prevent a war for the ship between the two clans.

During Roan and Clarke’s conversation, Riley has completely left his post. Monty feels he is going to try to kill Roan, which leads Monty to use himself in a prisoner exchange so Bellamy and Echo can find Riley before he assassinates Roan. Bellamy and Echo find Riley perched outside the cave Roan and Clarke were in. Bellamy uses his own experience at starting a massacre and how you’ll never forgive yourself for it to talk Riley down.

It was a pity, too, because I would love to see Echo put an arrow through Riley’s problematic ear. He’s been more trouble than he has been worth since Bellamy saved him from the Ice Nation. (I’m still upset with Bellamy for that) So war has been avoided, for now, between the two clans as Roan and Clarke sealed their agreement in blood. This show can’t let the characters have nice things, because then they hear an explosion coming from Arkadia. 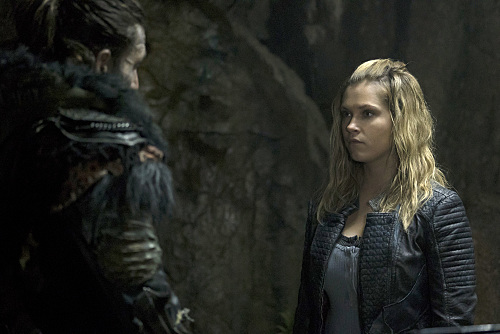 During the confrontation between Skaikru and Ice Nation, Nyla stayed behind tending to Octavia’s wounds. When Octavia awakens she remembers who brought her to Arkadia and knows she has to find Illian since the last time she saw him he was destroying technology in Polis. By this time, Illian has worked his way to the server room and doused the room with gasoline. Illian is ready to avenge his mother, but Octavia and Nyla arrive to stop him. Even though Octavia hates the Ark itself since she was a prisoner on it as a child, she tries to reason with Illian that they need it to survive. Illian basically tells Octavia since she wasn’t trapped in the City of Light she doesn’t know what it is to be a prisoner and lights the fuel causing an immediate explosion. Illian then helps Nyla and Octavia get out alive, but the damage has certainly been done. Skaikru and Ice Nation arrive in time to see Arkadia being destroyed by the fire.

This scene was beautiful in a depressing and hopeless way. There was no immediate cliché fix for everyone to work together to put out the fire to save Arkadia. The only thing Skaikru and Ice Nation could do was watch it all burn. There weren’t a lot of words spoken, but the expressions on the faces of those who were there spoke volumes.

I didn’t forget about Raven, Abby, and Jackson finding a rocket that can take them into space so they can properly create Nightblood. I just don’t want to think about Raven having potential fatal brain damage from when Clarke used an EMP to rid Raven of A.L.I.E. Since A.L.I.E took Raven over completely during that time, some of her code is still left in Raven and she is able to know what she does about Becca’s lab. An EMP was used on Abby, too, so her days may be numbered as well. Especially since she is having hallucinations of an irradiated Clarke speaking to her. Besides Arkadia being destroyed this episode did a lot of standing in place. With all other disasters being stopped with little consequence, it was a bit underwhelming with promises of a battle between Skaikru and Ice Nation. However, it is nice to see the story try and stay away from the conflicting clans plot that the show has consistently dealt with for 3 seasons. Especially with the impending Praimfaya coming, which as Bellamy said “Doesn’t give a damn which clan you belong to!”