Previously on The 100, “Gimme Shelter” 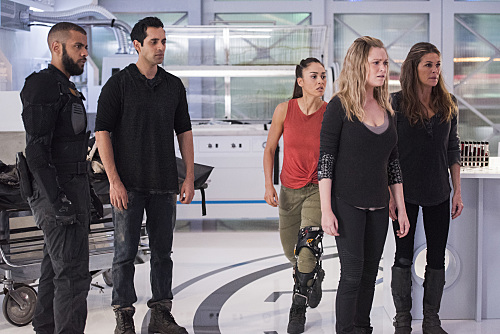 I Bear It, So They Don’t Have To

“Baylis’ is the unfortunate guinea pig for Clarke and Abby’s nightblood solution test. Baylis lasted long enough in the radiation chamber to withstand levels equal to black rain. However, as they increased the radiation, he died one of the more gruesome deaths you will see on a The CW primetime show. With the fate of humanity at stake, they have to keep trying so they tweak the nightblood formula, but a test subject is going to be needed. Emori is “volunteered” because Clarke and the others are pissed when they find out Emori tricked them into killing Baylis. Luna is not willing to use her blood to potentially kill someone else and tries to leave, but is stopped by Roan. Since Luna is injured, Roan has better luck with this Nightblood than the last one he fought, and Roan is able to subdue Luna so they can take her bone marrow to pull nightblood from it. Yes, the irony isn’t missed as Raven reminds Clarke how similar their actions and reasoning mirror those of Mount Weather’s when they were stealing bone marrow from them.

When it comes time to inject Emori with the updated nightblood formula, Murphy threatens Clarke and in no uncertain terms lets Clarke know that if Emori dies, Clarke will die. Abby cannot muster the strength to inject Emori with the nightblood. Clarke being who she is takes the syringe from Abby and prepares to do it, but injects herself instead. Abby is mortified by this turn of events and will not allow her daughter to go into the radiation chamber and proceeds to destroy it. Abby wasn’t about to let her baby girl go into that oven! 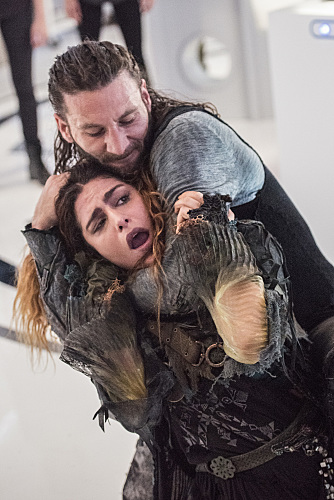 From The Ashes, We Will Rise

Jaha is leading a memorial service for 18 Skaikru members who died during the black rain. As Niylah says a small prayer for the fallen, Jaha overhears Niylah say “from the ashes, we will rise.” This is a phrase similar to what the Four Horsemen used to say to their people. Those who reached level 12 in their cult were chosen to be allowed in their nuclear bomb shelter. After Jaha questions Niylah on where she heard that phrase, Niylah tells him to ask a Flame keeper. Luckily for Jaha the team met a Flame keeper recently – Gaia, who is currently in Polis. Jaha, Kane, and Monty go to Polis to search for information about the bunker.

When they arrive, they are greeted by Indra, who promptly punches Kane in the face for forming an alliance with Azgaeda even though they slaughtered Trikru members. Indra goes with them to the temple where they’re greeted by Azgaeda soldiers. Kane asks them for safe passage as he shows them Roan’s royal crest. The Azgaeda soldiers allow them to pass, but Indra still grabs Monty’s gun and murders the Azgaeda soldiers. Kane is livid since they were letting them pass. Indra is still holding a grudge and vows that if there is a bunker, Azgaeda will never see it. Also, Monty reminds Kane that this will look like Skaikru attacked Azgaeda.

Once they arrive at the bunker they realize it can only be opened with a key. The symbol Jaha has doesn’t work, but Monty comes to the conclusion that “from the ashes, we will rise” may not be just a saying but instructions. They put the symbol in fire and it changes from level 11 to level 12 and it becomes a working key. They open the bunker and it looks well equipped to house much more than the Ark could, and Jaha appears to have found the salvation he has desperately searched for. 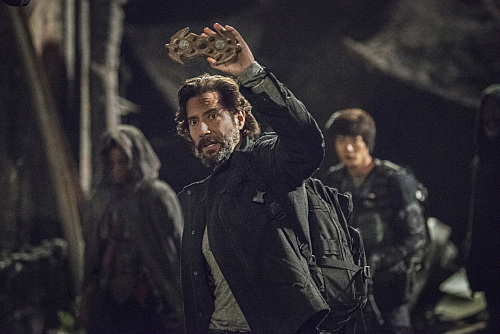 Look, I don’t know how many fans are in favor of Clarke becoming a Nightblood and eventually taking the flame and ruling all clans as Lexa did, and I am not looking forward to that… but the journey has been a great ride. All the tension in making the decision to start testing their allies and struggling with the tough choice Clarke had to make was a joy to watch. The interaction with Clarke and Roan was great. I usually cape for Raven all day every day, but she was not helpful at all this episode. Yes, we get that these methods are not ideal, but going around giving Abby and Clarke shit about it without an alternate solution other than the end of humanity is annoying as hell.

I also wouldn’t blame Murphy one bit if as soon as the black rain passed, they got the hell out of there. For someone who was saving Clarke’s life as she tried to save everyone else, the lack of respect he gets is getting old.

I need to get a t-shirt that says “Emori was right.” Seriously, if she didn’t volunteer Baylis who would Clarke and Abby have sentenced to death by putting them in that radiation chamber? If Jasper is just going to form his lil YOLO cult with Harper, Niylah, and now Bellamy, I’m fine with that as long as they aren’t in the way or messing up plans of the people who are trying to survive. Jaha has finally found the salvation he’s been looking for since he arrived on this terrible and beautiful planet. Now the challenge is figuring out how many can fit in the bunker, who gets to live in the bunker, and who gets left behind to die when the death wave comes.