Previously on The Flash, ‘Running to Stand Still’

Harry and the Cisco Kid

During a stakeout for the episode’s bad guy, Wells tells Cisco the story of how Zoom got his name. One police officer witnessed a zoom of blue electricity murdering every other police officer in the precinct. Later, Zoom came to his house and killed him, too. Cause Zoom is petty af.

I wonder if E2’s Joe West was that police officer. Murdering a precinct full of cops seems like something you’d do for a specific reason – not just for shits and giggles. Maybe it was personal? That brings up my next question: Why is no one asking Jay or Wells if they know Zoom’s real identity? There’s a reason the bad guys always want to know who the hero is behind the mask. You typically find the key to defeating them there.

By episode’s end, Wells makes good on his promise to do whatever it takes to bring his daughter home and he steals something that will go a long way in helping him take Barry’s speed for Zoom.

Joe tries so hard to connect with Wally, but even though Wally sought him out (and showed up on his door on Christmas Eve), Wally isn’t really meeting him halfway. He bristles when Joe introduces him to Singh as his son, he makes a smartass remark about Joe’s not-so-great detective skills since he missed the fact that he has a son (and he did this TWICE!), and he stands up the West family dinner.

When Joe finds out Wally has been drag racing in order to earn money for his mother’s medical bills, Joe offers to help, but Wally has already filled the man of the family pants and intends to keep it that way.

Thankfully, Wally eventually realizes that he’s the one who approached Joe and the two find some middle-ground. Hopefully it’s not temporary. 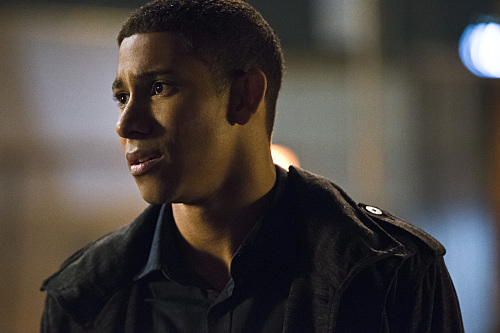 Jay Has A Lot of Nerve

Now that Legends of Tomorrow is set to premiere (insert praise hands), The Flash remembered they have Jay Garrick. When he’s not sitting around co-signing all the science talk from Cisco, Caitlin, and Wells, he’s busy keeping the secret that he’s dying from Caitlin.

After she unethically and illegally steals his DNA (What is it with this show and stealing DNA?), Caitlin confronts Jay about his illness, upset that he allowed her to get close to him knowing that he will die. Because Jay’s illness and imminent death is all about her.

There’s no cure so he’ll have to get his speed back, and that means stopping Zoom.

What disease does Jay have? Could it be the same incurable disease Francine West has? McGregor’s? I’ve wondered if Francine might eventually make a trip to E2 because they are medically more advanced. Maybe there’s no cure, but there’s long-term treatment that would prolong her life and she’d have to stay in E2 to get it. I could get behind that.

No Country for Patty Nono

When we last saw Barry and Patty at Christmas, things seemed to be going well. Since then? Not so much. He’s having nightmares and not telling her about them, and he’s become so distant it prompts Patty to reach out to his best friend for advice.

Seriously, what the hell is it with this show? Do grown-ass women really do this? Talk to someone other than their man about their man? I thought you stop doing that after high school.

Anyway, Iris learned from her heart-to-heart with Linda and tells Patty to talk to Barry. Later, she advises Barry to tell Patty he’s The Flash. Barry eventually agrees, but chooses the wrong damn time and place to do it: when he’s in the middle of trying to catch the episode’s bad meta-human, The Turtle, who can slow down everything and everyone around him by stealing kinetic energy.

After saving Patty from a falling chandelier, The Flash takes off with Caitlin and Jay. Patty is understandably pissed and gives Barry one last chance to figure out what the hell he wants. Before he can tell her, she’s kidnapped by the Turtle. Even after he tells Patty he took her to hurt The Flash, she still doesn’t piece together that Barry is The Flash. And once he does save her, she thanks him without wanting or needing to know who he is behind the mask. 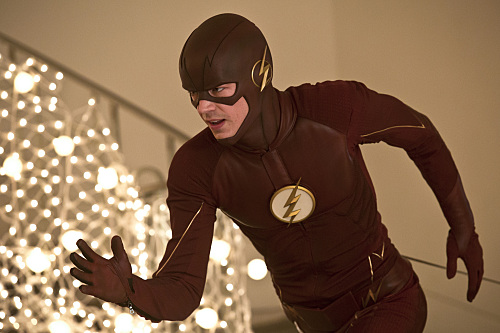 Then I stood up and did this:

The quiet of a residential neighborhood is broken by the arrival of Reverse Flash, who looks around and asks Gideon, “Where the hell am I?”

I have a feeling the season will only get better from here. While I am excited about Legends of Tomorrow (and we’ll be covering it on our Premium podcasts), I felt the first eight episodes of this season suffered due to setting up that series.

The other thing that didn’t work for me was Patty Spivot. I’m fine with Barry and Iris being with other people, but characters like Patty Spivot and Caitlin Snow aren’t written for women like me. She was quirky for the sake of being quirky, spoke in a way that real grown women don’t, and came off as ridiculously pressed ALL THE DAMN TIME. Toss in the fact that they tied up one of the more interesting things about her (wanting to become a cop to catch meta-humans like Mardon, who killed her dad) quickly and poorly (“When I kill Mardon, it will be legal.” Really?), well, the character didn’t stand a chance with me. Now that this episode dealt with getting Patty out of the way, I hope we can focus on all the things that made season one great: compelling villains (Reverse Flash/Zoom), the West family dynamic, STAR Labs’ shitty security, and WestAllen.

I’m glad they addressed how ridiculous it was that Cisco knew about a meta-human out there committing crimes, and never bothered to tell Barry, “Hey, we should probably figure out a way to stop this guy.” The “we’ve been kinda busy” excuse is lame, but at least they tried. Because we know the real reason was, “We didn’t bring up a meta-human who has the ability to do what we want to do to Zoom because we had to spend the first eight episodes on nonsense.”