Previously on The Flash, ‘Trajectory’

For at least the third time over the course of this series, Barry Allen’s friends are way too comfortable letting him do things (mainly, travel back in time) that might alter the lives, even winking them out of existence. 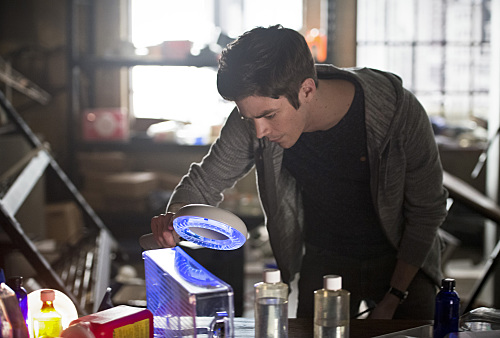 Thanks to Wally’s own research, Barry gets the idea to travel back in time to get Wells’ (as Thawne) help in increasing his speed. Everyone is cool with this idea except E-2 Wells who fears Barry will screw up the timeline.

Barry’s arrival is scheduled to occur after they’ve captured Hartley Rathaway and Wells-Thawne has admitted to knowing the particle accelerator might explode. The plan is to incapacitate Barry in the past and work with Well-Thawne without giving away who he really is.

Of course, Barry does almost everything he’s not supposed to do (including allowing his past self see his future self and arriving early), and Wells-Thawne figures out who he is and when he’s from thanks to Barry’s weird behavior and a time wraith that follows Barry through the speed force.

The episode had a few highlights, and every scene with Wells-Thawne and future Barry qualifies as one of the best – particularly watching the two threaten and negotiate a plan that gets them both what they want: Barry gets faster and Wells-Thawne can still maintain his secret long enough for his Barry to get faster and help him get home. Tom Cavanagh has done an amazing job separating the different Wells: original E-1 Wells, Eobard Thawne as Wells out and proud, Eobard Thawne as Wells pretending, and E-2. (Don’t even get me started on E-2 Wells having to pretend he’s Thawne-Wells in the Grodd episode.) Here, he brought out Wells-Thawne’s terrifying quiet rage perfectly and called back a few of his character traits like proclaiming, “Oops!”

Backed into a corner, Wells-Thawne gives Barry his speed formula. With a little help from Barry from the past, future Barry returns home with the answers he needs, and having only changed the timeline slightly – we think. Hartley is now a part-time member of Team Flash and has a healthy relationship with his parents. At least we know one person gets a happy ending.

He obtains a beautiful video message from Eddie to Iris. When she watches it in present day, it gives her the peace and closure she needs to move on with her romantic life.

Realizing that he can’t control Barry and always keep him out of harm, Wells finally admits that he has to give Jesse the time she’s chosen to take to forgive him.

This may be one of my favorite episodes of the series. The wraith was poorly explained, but coolly rendered. It was almost as terrifying as thinking Wells was going to stand up and call Barry out during their very first conversation.

I like that Barry is still flawed (he has the best intentions, but still… every rule, Barry? Really? You had to break damn near every one?), and I’m happy to see he’s not moping over Jay’s betrayal. He’s laser-focused on what he needs to do to bring Zoom down.

Candice Patton was her typically flawless self whenever they give her scenes where raw emotion is required.