Previously on The Flash, ‘Flash of Two Worlds’

This episode had my favorite opening to date. Iris, chased by two men with guns in a building under renovations, calls Barry for help. After learning her location, Barry instructs her to jump out of the window. After only one, “Say what now?” Iris jumps and Barry catches her. Iris was in danger following a hot lead, and both the story and the rush of the rescue have left her downright giddy. It was adorable, and great to see Iris doing investigative journalism not centered around The Flash.

Her instincts pay off when her story is given the cover at the paper. This news is delivered by Linda Park, who is legitimately happy for Iris.

The main story this week was the return of the Snarts, including Papa Snart (Michael Ironside). Lisa approaches Team Flash for help: While in the middle of a heist, Cold was taken and she was knocked unconscious by the assailant. She’s ready to cash in on the favor she feels Cold is owed for not killing Barry during the ‘Rogue Air’ escape… never mind that he wouldn’t have been in danger from the escaping meta-humans if it weren’t for Cold’s betrayal, but that’s criminal logic for you. After some coaxing from Cicso, the group agrees and Cisco tracks her brother by the cold gun. 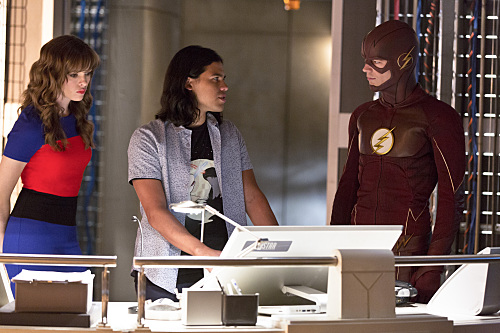 Turns out, Cold was taken by their father, who is forcing him to use his gun to pull off heists. A bomb implanted in Lisa’s neck while she was knocked out ensures Cold will do whatever his abusive father asks. That’s right: the man put an explosive in his own child.

Barry goes undercover as an associate of Cold’s for the next heist while Cisco works on removing the device from Lisa’s neck. He does so in the nick of time, of course, and Cold kills his father.

This lands him in jail, but we all know he won’t stay there for long – even if Joe is having him transported to the meta-human section.

Team Flash tries to figure out how the big-ass wormhole in their basement works. Jay is particularly interested in this because he wants to go home. Even though he should be at home resting after his spike in blood pressure caused him to pass out last week, Stein is there to give his input. Together they realize the breaches are doors with an unstable corridor between them. Jay, with an assist from Caitlin, gets to work on stabilizing it, creating a speed cannon.

By episode’s end, it’s complete. Stein tosses a book through the portal and it doesn’t bounce back. Jay is ready to go home, but he lets Caitlin convince him to stay until they figure out what Zoom’s up to and how to stop him. Jay would be going home powerless, after all. Also, Caitlin is thirsty AF.

Speaking of thirsty, Barry has a few run-ins (literally) with Patty Spivot this episode. She proves to be helpful, if a bit annoying, at a crime scene: a decapitated corpse is found, a man who had his neck explosive activated by Papa Snart after the associate lipped off to Captain Cold. Joe’s reaction to Patty’s bad jokes and incessant rambling was the same as mine, “Oh, hell no.”

Later, after bumping into Barry again at Jitters, she gets a mixed signal and offers him her phone number. Barry awkwardly accepts it.

It seems Joe’s disturbing pattern of lying to Iris for her own good began when Iris was five and called the police because her mother had passed out after taking too many pills. Francine, Iris’ mother, left town and Joe told Iris and everyone else she was dead to save Iris the pain of thinking her mother abandoned her.

Now that Francine is back in town, she wants to see her daughter and Joe is forced to admit the truth to Iris. Shocked, Iris forgives her father almost immediately upon seeing how broken up he is.

Now that the speed cannon is functional, Earth-2’s Harrison Wells decides to stop by for a visit.

The theme of parental influence was handled nicely in this episode. The Snart kids may have despised their abusive father, but they have followed in his criminal footsteps. Establishing that Captain Cold is capable of caring about someone other than himself will make the transition to hero (anti-hero) in Legends of Tomorrow easier to swallow. Plus, it’s always fun watching Cisco interact with Lisa Snart.

I’m not thrilled with Iris’ mother being written as a drug addict, but I’m reserving judgment until I see more of the story play out. I was not enthusiastic with the casting for this role, and the short scene she (Vanessa Williams) had in this episode didn’t do much to bring me around. However, Candice Patton and Jesse L. Martin turned in great performances.

Victor Garber continues to shine as Dr. Stein and the arrival of Earth-2’s Wells has me looking forward to more Tom Cavanagh goodness – hopefully sooner than later.