Previously on The Flash, ‘Gorilla Warfare’

In one of the better character intros I’ve seen, we meet Vandal Savage, an immortal who is drawn to Central City in search of his lost love.

She is, of course, Kendra, who is in the middle of a romantic date with Cisco when Vandal appears. The Flash stops him from taking Kendra, but not before Vandal mentions Kendra is really a priestess who he has known for ages.

Once Cisco lets it slip that Barry is The Flash in front of Kendra, they figure they might as well reveal to her the secret identities of Star City’s masked heroes too, and they all head there to get Oliver Queen’s (and company’s) help in protecting Kendra.

There’s the usual bit of humor, teamwork, and shade (Oliver is an asshole, after all), but that’s all interrupted when Vandal makes another play for Kendra, this time at Oliver’s home. Realizing that shit might have gotten a bit realer than they expected, the group heads back to the Arrow lair to reassess. Malcolm (a.k.a. Ra’s al Ghul) stops by to warn the team they’re pretty much fucked, and reveals Vandal’s immortal status. This makes sense of the fact that they earlier saw a picture of him in the 70s, but he hadn’t aged at all since then. Also, Cisco finally comes clean about his vibe of a winged Kendra.

This all proves a bit too much for Kendra, who decides to go outside and away from all the superheroes with weapons who might be able to protect her. Deep down, Kendra suspects that some (if not all) of what Vandal said might be true since she can’t explain the desire she felt to move to Central City.

Carter Hall (Hawkman) swoops in and takes Kendra for a little rooftop rendezvous. He confirms that she is a priestess and he’s a prince. Once she emerges, she’ll remember what he’s saying as truth. Unfortunately, that will have to wait because Oliver and Barry show up to deal with this new threat. Once they have Carter contained, it’s back to the Arrow lair for another information dump. 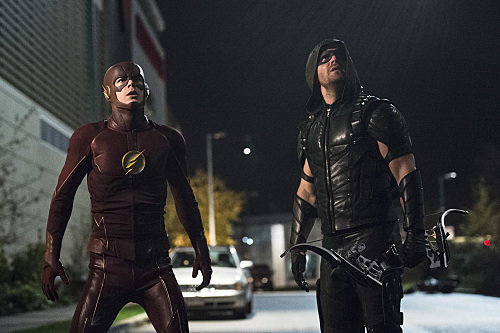 For thousands of years, Carter and Kendra have been dying and reincarnating, always seeking each other because they’re soulmates. (Poor Cisco) Vandal Savage hunts them, kills them, and gets stronger as a result. He’s done this 206 times. Despite Vandal’s impeccable record, everyone squads up to defeat him should he try again.

First step: Get Kendra’s true nature to emerge. When being pushed off the roof doesn’t make Kendra sprout wings, Carter surmises something is holding Kendra back from acknowledging her true self. Malcolm suspect Vandal has gone in search of the Staff of Horus, a weapon that should make it easy for him to just wipe out a whole city to kill Kendra and Carter.

The staff is buried in a church in Central City so Barry and Oliver head there while Kendra goes back on the roof to work through her shit.

She finally jumps and flies, but Vandal gets to the staff before the heroes and he blows the church to pieces. He is so damn petty.

Everyone decides to go to Central City and further prepare to defeat Vandal.

Not only is Barry not getting faster, his current abilities are so inferior to Zoom’s that there’s no way he could ever beat him. While the majority of the gang is in Star City, Caitlin works with Wells to perfect a speed serum he’s developed, Velocity 6. Wells got serums for days.

Once they figure it out, Caitlin calls Jay so they can test it on him and he reacts like they asked to shoot him up with black tar heroin and leaves. Because that’s what Jay does best: Whines about how everything is a bad idea and then stomps off to wherever the hell it is he’s living.

Patty Nono spots Wells in the street and follows him back to STAR Labs where she shoots him, thinking the serum gun in his hand is a real one and that he’s the man who killed Barry’s mother and broke into Mercury Labs. Caitlin tells Patty to call Joe, and he tells Patty to go sit her ass down somewhere while grown folks do grown folks things.

The only way to save Wells is to remove the bullet so Caitlin calls the one person who probably won’t give a shit if Wells lives or dies: Jay. He reluctantly takes the serum to get a temporary speed boost, then phases his hand into Wells’ chest to remove the bullet. His work done, Jay stomps off (again), saying Caitlin shouldn’t let Wells give Barry Velocity 6.

Oliver spots his ex and her ten-year-old son. Oliver can count.

Leave your thoughts on the episode below and we’ll read them on tonight’s podcast!

A lot of this was silly, but what was good was very, very good. If someone like Vandal sends Team Flash in search of Star City help, why haven’t they done this for Zoom? He’s way more imposing than Vandal Savage. But that, plus quickly filling Kendra in on Barry’s secret, and the quick evolution of Cisco’s relationship with Kendra are all to be expected since this episode only exists to shift into Legends of Tomorrow.

The fact that Iris was – once again – sidelined is baffling. But even if they thought there were valid reasons to keep the character out of the action, it makes no sense that she wasn’t even referenced. Why wouldn’t Felicity ask about Iris? You could say she didn’t ask about Joe, either, but Joe has had things to do. There’s no danger of the audience forgetting he exists. The same can’t be said for Iris.

Some things that were great: Damian Dahrk, the chemistry between the two casts, Felicity, Malcolm’s shady entrances, and Carter. I’m still looking forward to LoT, and I’m hoping the character of Kendra becomes more layered. Oh, and Thea, as always, is bae. “I ended it.”