Previously on The Flash, ‘Legends of Today’

Ugh. This show. I can’t believe I not only don’t like it as much as I used to, but that they’re getting so many things wrong in just nine episodes. I know many feel like I do: Setting up Legends of Tomorrow has hurt both The Flash and Arrow, but that’s really no excuse for how they’ve dropped the ball on some of these plot points.

The episode began strong with Zoom chasing Wells through STAR Labs. I was hoping this was a flash forward and the bulk of the episode would show how we got there, but no. Harrison begs for his daughter’s life and Zoom wishes him a Merry Christmas.

Wells spends much of the episode being grumpy and sketchy, and I am totally here for it. I love sexy-ass, whispering, suspect Wells. Though, he’s not acting like a man who was just shot in the chest.

Zoom wants something from Wells and gives him a few days to agree or he’ll kill Jessie. Wells realizes Zoom has been sending meta-humans after Barry in order to build up his speed. The more speed Barry has for Zoom to steal the better. After Zoom gives Wells just a few moments with his daughter, Wells agrees to help steal Barry’s speed. And this just after Barry finally forgives old Wells/Eobard for what he did to him.

No, Patty Nono. Just No.

Mark Mardon returns to Central City and busts Captain Cold out of jail. Makes sense because Mardon owes Cold a favor for rescuing him in “Rogue Air.” But he also releases The Trickster and the two plan on terrorizing the city and killing The Flash.

Since Captain Cold ain’t ’bout that life, he warns Barry after breaking into Barry’s house and making himself a cup of cocoa. I wouldn’t be surprised to learn he was also wearing Barry’s slippers. He just made himself right at home. And although he gives Barry the heads-up, he refuses to help him fight the others and he damn sure isn’t volunteering to go back to jail. He doesn’t owe Barry that much after Barry helped him save Lisa from their evil father. 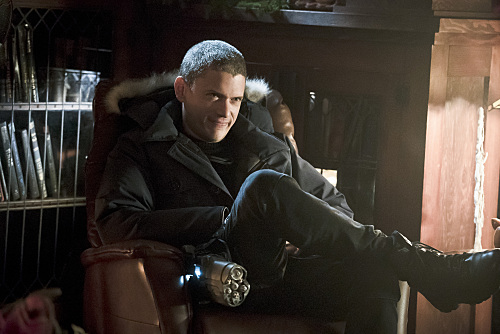 Patty is beside herself when she learns Mardon is out. She doesn’t want to talk to Barry about it and even notes that Barry doesn’t have any idea what’s really going on in the city. Oh, you poor, sweet summer child.

Thanks to Barry’s knowledge of the day that never was, Cisco works with Jay to create that wizard wand in the hopes it can stop Mardon.

Trickster gonna Trickster and he releases a video taunting The Flash. Thanks to Jay’s eagle eye and Wells’ knowledge of children’s toys, they trace Trickster’s location to an abandoned toy factory. Patty also figures it out and goes rogue to catch Mardon. It’s all a set-up, and The Flash rescues Patty and himself. Afterwards, Patty admits that she only became a cop so she can kill Mardon legally.

First they have to catch him, and it seems that might be kinda hard to do now that Mardon can fly. The Flash does catch Mardon, only to allow Mardon to publicly beat him or else 100 presents given to children will explode in their homes.

Jay and Wells work together, with Cisco’s drone, to find one of the bombs and launch it through a breach. The other 99 gifts fly through windows and into the sky to follow it because science.

Threat eliminated, The Flash subdues both The Trickster and Mardon, but then Patty Nono arrives and immobilizes The Flash with something I’ve never seen before and threatens to execute Mardon in cold blood. The Flash successfully talks her out of it and then there’s soaring triumphant music like anyone actually gave a fuck whether she killed Mardon or not.

Hey, everyone! Jay is finally being useful… with no explanation. Prior to his reluctantly helping Caitlin save Wells’ life last episode, he wanted no parts in a plan to trap Zoom. He said it was too dangerous and he was kinda right since Barry ended up getting his ass handed to him. Now, the new plan is to… trap Zoom and Jay’s all in.

Note: A few people said that the Velocity 6 he took last week was really a placebo and that proves he has his powers, he just has a mental block – or Cisco loving called it in season one, Jay has “the yips.” There’s no evidence of that in this episode – at least Caitlin isn’t acting like she gave him a placebo – so I’m not sure I buy that placebo theory.

Anyway, this new plan, you may remember, is to close all of the breaches except the one in STAR Labs. This way, Zoom can only enter and leave via one way. Again, not really sure how this is any different than the last plan that failed, especially since there was no mention of the speed boost serum nor was there any discussion on how to make Barry faster so that he can actually beat Zoom once he gets there.

Now that Jay is actually being helpful and not womp womp’ing every plan to get shit done, he’s quite enjoyable to have around – particularly when he’s busting Caitlin’s chops and pretending that he doesn’t know what Christmas or mistletoe is because they don’t have them on Earth-2.

The burden of keeping such a big secret from Joe is weighing heavily on Iris. She turns to Barry for help, no longer able to hold it in. He assures her Joe is strong enough to handle it, and offers to be there when Iris tells Joe.

Joe is as shocked and devastated as you’d expect and needs time alone to process. He later expresses to Barry his guilt over not looking for Francine when she got out of rehab, which totally contradicts him saying that he tried to find her after she left but that as a cop’s wife, she knew how to stay hidden. He also conveys some low-key misogyny as he laments Wally not having a father to teach him “how to be a man.” *eye-roll* But since Jesse L. Martin is a phenomenal actor who sold the scene, I’ll allow it.

Later, Joe tells Barry he met with Francine (which would have been nice to see) and he’s no longer angry and actually excited that there’s another West. Uh, sure. I guess. Wally doesn’t know about Joe yet, but he’s sure it will come. Then he gives Barry the watch his father gave him.

At the family’s Christmas Eve party, Wally makes a surprise visit – and it was the best scene in the entire episode.

The Good
+ Captain Cold is always fun and I’m looking forward to seeing him on Legends of Tomorrow.
+ I knew they were going to show us Wally at the very end, but it was worth it. Candice Patton, Jesse L. Martin, and Keiynan Lonsdale did so much with a very small, quick scene.
+ The return of Barry and Iris acting like best friends who grew up together.
+ Running on helicopter blades. Whoa.
+ Cisco acknowledging what we’ve been saying about Caitlin for weeks: “The thirst is real.”
+ To learn that “every Earth has The Godfather, Vito” was cool. Jay’s head nod after Wells reveals that was awesome.

The Bad
– Why did we need Captain Cold to tell us what Iris has been up to while being woefully ignored these past few episodes?
– Not only did Joe “get over” what Francine did, he did it quickly and off-screen. That’s right. We didn’t get to see this long overdue conversation, nor do we have any indication why Francine would do such a thing.
– No explanation as to why Jay is suddenly down for whatever. It’s like his actions and words from prior episodes never even happened. They just needed him there so Caitlin would have someone to kiss under the mistletoe.
– Patty is the weakest character on the show. The exposition dump about the day her father died was laughably bad and made no sense. And then she admits she became a cop so she could murder a man without consequence. Lovely.

This show used to be great. Now it’s just aight.