Previously on The Flash, “Shade”

This episode wasn’t bad, but it wasn’t great either. It definitely didn’t live up to the hype – and neither did the other Kevin Smith directed episode “The Runaway Dinosaur.” Much like that episode, the reason “Killer Frost” didn’t work for me has nothing to do with the directing; it’s the writing I have a problem with. In “Dinosaur,” we were hit with things we had no idea existed: Barry is struggling with not saving his mom and the Speed Force is capable of keeping Barry and communicating with him in the form of his loved ones. Okay. Sure. This week, Caitlin’s power makes her evil. For reasons.

After Savitar makes off with Barry in a trip very much like the You Ain’t Shit Tour Zoom took him on, Caitlin and Cisco use their powers to track them down and Caitlin freezes Savitar. This massive use of her power awakens Killer Frost and saves Barry, but Savitar gets away.

While everyone worries about getting Wally out of his chrysalis, Caitlin sneaks off to the CCPD to interrogate the lone Alchemy disciple they were able to capture. She’s busted by Julian so she kidnaps him and demands he figure out a way to locate more disciples. She hopes one can lead her to Alchemy, who can then take away her powers… because the villain would totally do that for her. Caitlin ends up injuring Julian with her powers before Barry comes to knock him out and try to talk her down. She blames Barry for everything, citing his desire to make sure his life was perfect and how it ruined hers and Cisco’s. 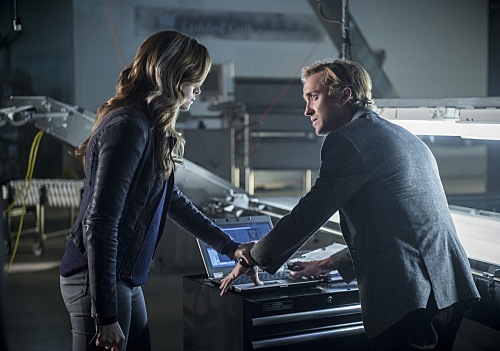 Since Barry didn’t bother to disguise is face or voice, I’m assuming Julian figured out he’s The Flash since he knows Caitlin is Barry’s friend. More on that in a bit. (However, if not, I’m calling bullshit.)

Then Caitlin drops a bomb I hadn’t considered. She tells everyone that Dante was alive before Flashpoint. Now, I thought everyone could assume the things Barry didn’t know about were different in Flashpoint, like the Speed Lab. So, if Barry doesn’t know Caitlin has powers, and he didn’t know that Dante was dead nor that he and Cisco fought over it, it would stand to reason that those things weren’t in Flashpoint. I guess I was wrong, because this news both shocks and angers Cisco. He has to put his feelings aside, though, in order to locate Caitlin after she takes off in search of a disciple.

When Caitlin finds one, he tells her he has no idea who Alchemy really is, and that they both serve a higher power who showed them the future. In it, Killer Frost is glorious. Barry and Cisco eventually take Caitlin down and lock her in the pipeline.

Anyway, back to Caitlin Barry goes, because they need a doctor for Wally. After he delivers a mega-Flash pep talk, Caitlin is able to resist her inner Killer Frost and make a serum to help Wally. The day is saved, but now Barry needs to convince Julian not to snitch that the ice-wielding meta-human who terrorized the city that night is Caitlin. Julian agrees, but only if Barry resigns from his job because anyone who would put aside justice to help a friend clearly doesn’t deserve to work in law enforcement. Of course, Barry agrees. He already feels guilty and Cisco still lowkey wants to kick his ass.

Also, Julian is a whole bitch. And Alchemy. I guess. Ugh.