Tiff (Camryn Jones), Erin (Riley Lai Nelet), Mac (Sofia Rosinsky), and KJ (Fina Strazza) are teenage girls in Ohio, just trying to get their papers delivered on Hell Day, the morning after Halloween in 1988. The girls prove capable against racist neighbors and high school boy bullies, but things get both real and unreal when they encounter time (possibly space) traveling young men who are being hunted by murderous… clerics? (Led by the amazing and terrifying Adina Porter.) 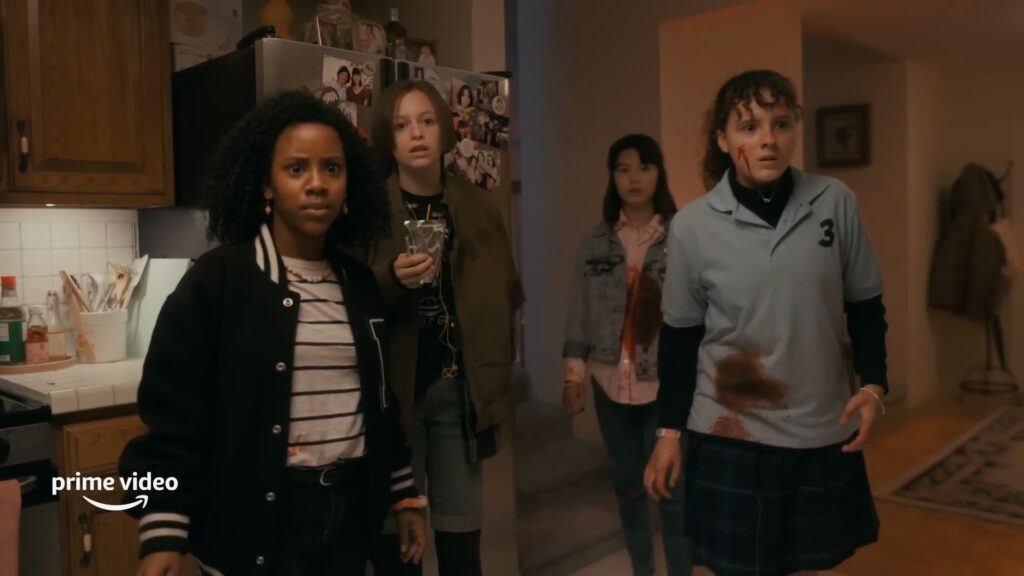 Having read a great deal of the graphic novel series upon which the series is based, I have vague recall of where the story is going. I like this because it makes this all feel fresh. I re-read the first issue after watching this episode and was surprised by how much book material the first episode covered, but that gets no complaints out of me as the execution was just so good. With small, well-written scenes that gave us time to breathe in between the gunshot wounds and frantic fleeing through the woods, the episode clearly established who these girls are: Mac says stupid and problematic things because she repeats what she hears at home; Erin struggles to fit in while also taking on adult responsibilities to help her mother, who speaks very little English; KJ’s conflict lies in who she really is versus who she is expected to be; and responsible, focused Tiff might be tested most of all as what she thought she knew about the world and her future is no more.

First America Chavez, then Kamala Khan, and now the Paper Girls. 2022 has been a great year for seeing some of my favorite comic book young women get awesome live-action treatment. You can hear more of my thoughts on this premiere by signing up for early podcast access on Patreon.

Paper Girls is a 30-issue graphic novels series written by Brian K. Vaughan and illustrated by Cliff Chiang. It is published by Image Comics.